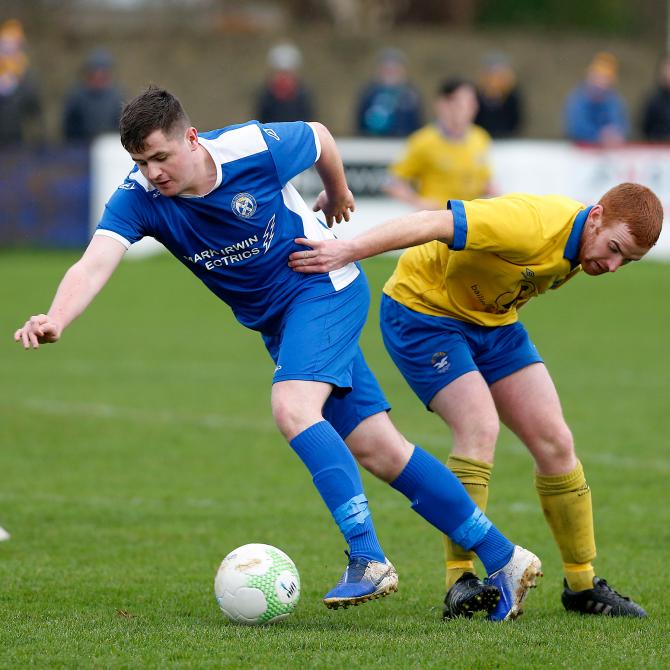 IN what proved to be a tense and tight encounter, Limavady United were left to rue their missed opportunities as Bangor were able to collect all three points at The Showgrounds and remain in the title race for the Bluefin Sport Premier Intermediate League.

While there was a lack of goals in the opening period, the first half was entertaining with a number of distinct chances for both sides. Gary McFadden, Ryan Doherty, Dean Brown and Aaron Mullan all had good opportunities to get on the score-sheet in the first 45 minutes but to no avail.
Bangor's Gerard McMullan was proving difficult to deal with for the LUFC defenders with his many troubling crosses from the wing, while captain, Thomas Wray was commanding in defence marshalling much of the Limavady attack.
Both teams went into the changing rooms evenly matched yet the Roesiders probably felt that they had the best of the chances in the first half.

After the goalless first half Gareth McFadden was able to slot home a Marcus O'Kane cross to give the home side the lead in the 56th minute.
Only three minutes later the sides were level when Bangor's Ben Arthurs was able to dink the ball over Ray Kelly to make the score 1-1.
Limavady United were still creating chances in the second half but were unable to convert. Dean Brown had a good shot saved by Bangor goalkeeper, Michael Dougherty in 68th minute and had a shot skewed just wide of the target a few moments later.
Bangor too were getting scoring opportunities and hit the cross bar in the 78th minute before Ben Arthurs got his second goal of the day in the 83rd minute when he got on the end of a Halliday cross with a header at the back post to make the score 1-2.
Limavady had one final opportunity in the 90th minute from a corner that was blazed over the crossbar which ensured that Arthurs' goal was to be the winner for the Seasiders.
Ben Arthurs' two goals on Saturday place him as top scorer for the league with 7 goals. The victory for the North Down men will give them hope that can still contest for the league having two games in hand. The youthful Limavady United squad however will be on the search for more consistency in their next few games which has otherwise been lacking this season.