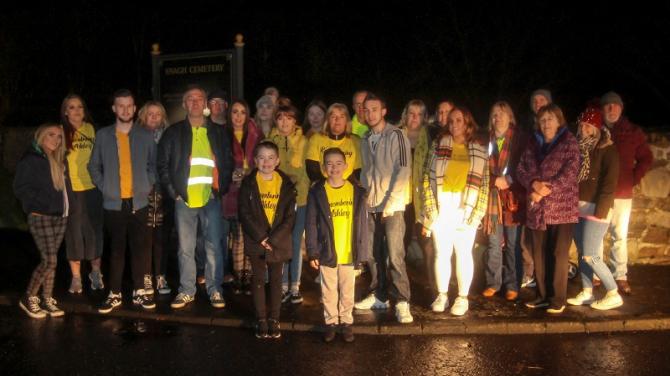 A SPECIAL evening took place in Limavady last Friday as family and friends gathered to honour the memory of local lad Ashley Barnes.

Loved ones of the young Limavady man, who sadly took his own life five years ago,joined together at Enagh Cemetery to set off on a sponsored walk in aid of mental health and suicide awareness charity, LIPS (Limavady Initiative For The Prevention Of Suicide).

Ashley’s mother, Jackie Barnes, who organised the fundraiser, spoke to the Northern Constitution, praising the generosity and dedication of everyone involved in a cause that is close to her heart.

She said: “My son would have been 30 years old on Friday so I decided to do something special to mark his birthday and get everyone together for a good cause.

“I was overwhelmed doing the walk and I went through a lot of mixed emotions.

“Overall, I am just glowing inside at everyone’s generosity and how good people have been helping out with everything.”

Dedicated walkers dressed in yellow to symbolise suicide awareness and prevention, while some wore t-shirts that displayed the special words ‘Remembering Ashley.’

Jackie went on to say: “We started walking from Enagh Cemetery where Ashley is buried and walked to the tip of the woods and back again through Roemill Road.

“We finished the night at Banters Bar where we had a raffle and prizes.”
According to Jackie, the family have raised around £1800 so far.

She said:“There is still donations to come but we are so pleased at the amount already.
“It was just a brilliant night.”

Meanwhile, a spokeperson for LIPS told the Northern Constitution:

“LIPS are touched to be the beneficiaries of this donation in memory of another young life lost in our community.
“This will be used to provide Suicide Alertness training for groups and individuals within our town, as we attempt to provide as many people as we can with the tools to ask about suicide.”