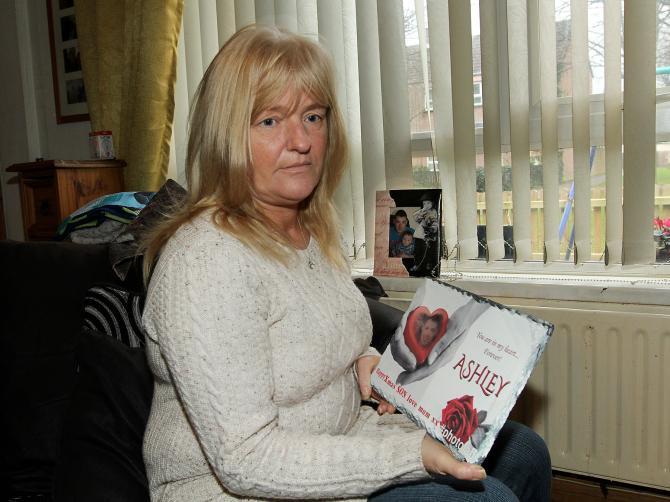 A DEDICATED Limavady mother who recently held a fundraiser in aid of LIPS and in memory of her son, is determined to break the stigma of mental health and promote suicide awareness within the community.
Around five years ago, heartbroken mum Jackie Barnes was left devastated following the loss of her son Ashley to suicide.
“At the time it was just awful,” explained Jackie.
“If it wasn't for my friends and family, I don't know what I would do, they have been absolutely amazing over the years.”
Just last week, the loved ones of the young Limavady man joined together on a sponsored walk, raising over £1800 in aid of mental health and suicide awareness charity, LIPS (Limavady Initiative For The Prevention Of Suicide).
Jackie continued: “Initially, I had set the target of £500 so the amount raised was beyond my expectations, it's unbelievable.”
According to Limavady mum Jackie,she admits there was no support in the community for bereaved families at the time of her son's death.
“I had been taking my son to the doctors and they had given him antidepressants but that was really the only support we were getting,” explained Jackie.
“We are blessed now to have the suicide awareness charity LIPS in the town as they have made a huge difference to a lot of people's lives.”
According to Jackie, on her son's birthday each year, the family visit Ashley's grave and release balloons in his memory.
“This year he would have been 30 years old so I wanted to do something special, not just for him, but for someone else too, that is why I chose LIPS charity.”
Recalling fond memories of her son Ashley, Jackie described him as a 'fun-loving' lad who was a former pupil of Limavady High school.
She told the Northern Constitution:
“Ashley was the biggest dote.
“He was so easy going, bubbly and just full of life.
“He had hundreds of friends and was just a down to earth wee lad.”
For heartbroken mum Jackie, who is one of many mothers affected by suicide, she wants to promote the importance of talking to someone if you are in need.
She continued: “At one point, the suicide rating in Limavady was shockingly high and it seemed to be a lot of young chaps too.
“If anyone feels they are at the stage that they don't want to be herea any more, just know there is always someone to talk to.
“They might be ending their own suffering but by doing that, they are passing it onto their loved ones. “Life is too great to cut short, please don't put anyone through this pain.”
Meanwhile, Co-founder of LIPS charity, Willie Mulhern who set up the group along with Sam Barr after losing both of their sons to suicide, told the Northern Constitution:
“Jackie has put a lot of effort into promoting mental health and the loss of her son in the community.
“I attended the sponsored walk she had organised and there was such a great turnout for an important cause.
“She hasn't had it easy and she is an amazing person, being able to find the strength and encourage to move forward after the loss of her son – the contribution she has donated through her charitable work is going to help others who have suffered in the same way.”
Willie continued: “It is amazing how the community have embraced LIPS and people are willing to speak more about suicide and mental health now too.
“At the end of the day, it's not an easy road, it's a long road but if you can save one life in the community, then at least that's something.”