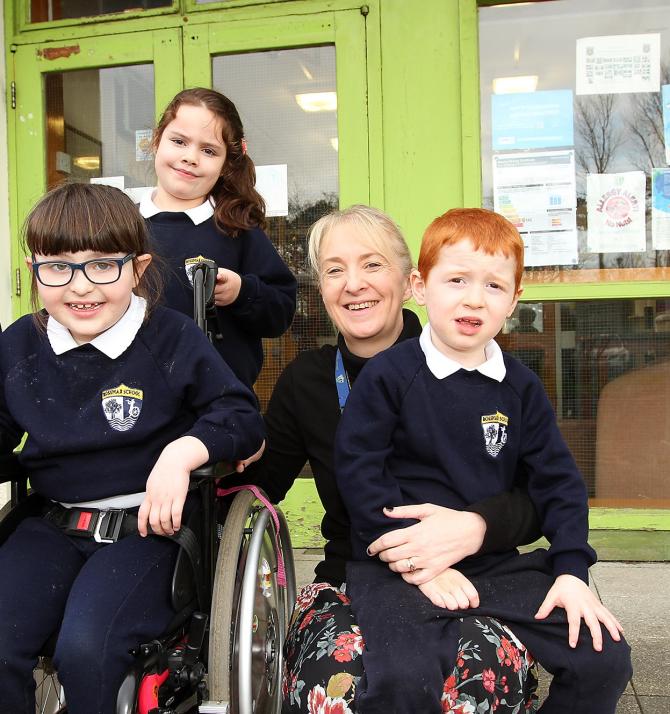 TWO Limavady schools have received special recognition for their service to education in recent years and have duly been nominated for the esteemed Families First NI Education Awards.
Rossmar School and Roe Valley Integrated Primary School have both been nominated for Best School in the County Derry category, while Mrs. Caroline Clements, Principal of Rossmar has been nominated for Best Principal in the County Derry category.
Mrs Caroline Clements, Principal of Rossmar School in Limavady, spoke to the Northern Constitution about what being nominated means for the school.
Mrs. Clements said: “Being nominated means an awful lot to the school.
“It highlights the great support that we've been given by parents, grandparents and guardians throughout the years.”
“It's heart-warming to get such positive feedback from parents and it really does give a boost to staff morale.”
Mrs. Clements continued: “As a principal it feels good to be recognised with all the new initiatives that have been implemented in recent years.
“I have been Principal at Rossmar since 2017 and since then we have introduced a nurture room, Duke of Edinburgh awards with a first Bronze DOE award for the school, our first school formal and school trips to Manchester United.”
Rossmar School is in the middle of the new school build which can be a long process but will have lasting benefits for the education delivered at the school.
Mrs. Clements said: “The new school build is going well. “We fought very hard for the new school build.
“We have recently secured five extra classrooms which adds more time to the overall build but will be more beneficial for the school long-term.
“The parents support me on this which is reassuring.”
She continued: “Included in the new school build will be a state-of-the-art sensory development area along with a total immersion room and a rebound therapy room.
“We will also have specialised rooms geared towards music with a recording studio, an art room and a technology suite with up-to-date equipment.”
On the Families First website the awards evening has been described as an event “to shine the spotlight on those who have made huge sacrifices” and it provides a platform to ‘award anyone who deserves recognition.’
Mrs Clements went on to say: “The awards ceremony promises to be a night filled with pride and honour.
“A full evening offering gourmet food, a ceremony showcasing the best within the family industry, and dancing into the night.”
Mrs. Joanne O'Donnell, Vice-Principal of Roe Valley Integrated P.S. also spoke proudly about the school's nomination. She said: “We are delighted to be nominated an award in our category.
“We are immensely proud of the ethos in our school where our pupils feel valued, supported and can achieve.
“Roe Valley Integrated Primary School are this year celebrating 15 years of integrated education here in Limavady. “This is thanks to the hard work of staff, fabulous pupils and the entire school.”
The Families First NI Education Awards will take place at Titanic Belfast on February 7.