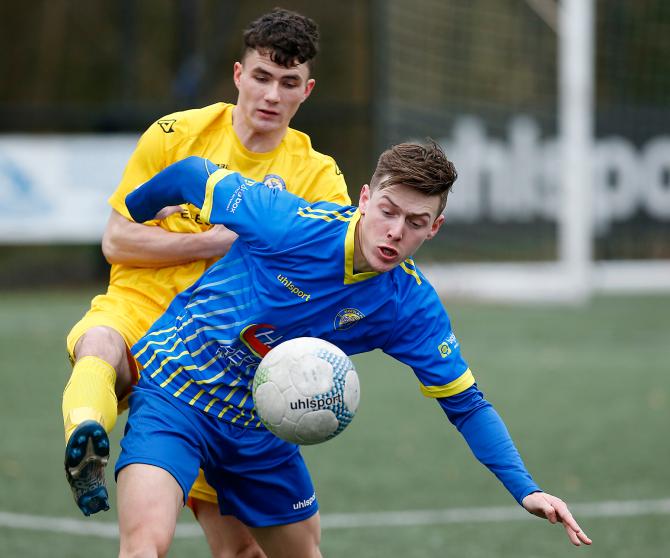 On Saturday Limavady United travelled the short distance to Mill Meadow Castledawson to play Moyola Park in their efforts to reach the quarter finals of the Intermediate Cup.

United manager Mark Clyde made some changes to the side who had drawn at home against Lisburn last week, significantly Robbie Hume was back in a Limavady shirt having re-signed recently, Robbie took the place of Stephen Mills ‘up front’, who was ineligible following his own recent signing for the club. Also missing was Mark Devenney who found out quite late in the day he was suspended for this game having picked up a yellow card against Lisburn.

The strong winds were always going to do there best to make life difficult for the players, but it was nothing to the uphill battle Limavady were going to face when with less than 5 minutes on the clock Moyola were awarded a penalty, referee Louise Thompson, who was well placed, having no hesitation in pointing to the spot for a handball infringement.
Moyola’s Raffery duly coverted from the resulting kick sending keeper Kelly the wrong way.

Shortly after that penalty United’s John Butcher almost got onto the end of a through ball into the Moyola penalty area but was denied a clear opportunity by quick defending and great positioning by the Moyola goalkeeper.
On 35 minutes, United felt aggrieved as they were denied a penalty for handball in Moyola’s penalty area.

Both teams were learning to cope with the conditions as the half progressed, and in truth Moyola were the better team and worth their one – nil lead as the half time break approached but a moments lapse by United saw them two down as Daniel McIlhatton found enough time at the edge of the penalty area to fire a shot into the Limavady goal.

Whatever manager Clyde said to his team during the break seemed to bring the United team to life and they made a much better start to the second period as they looked much sharper and set about trying to narrow the deficit, on 55 mins John Butcher showed his quick pace to get one on one with the goalkeeper and was very unlucky to see his chipped shot, as the goalkeeper advanced, go just wide of the post.
On 65 minutes, Limavady’s work rate was rewarded when Dean Brown attacked on the right hand side before unleashing a shot the far corner of the net past the Moyola keeper.

However, United were to face heartbreak just after, as so often is the case in football, Moyola bounced back almost straight away, again extending their lead to two goals when Chris Dowie was given to much time on the edge of the penalty area and his resulting shot was well placed to beat Kelly in goal.

Manager Clyde responded by bringing on Aaron Mullan for Oisin Hassan, Aaron going into his familiar role at centre back whilst team Captain Hugh Carlin moved into midfield as Limavady sought to apply further pressure however they were punished further when Dowie added his second confirming Moyola’s progression to the quarter finals.
A 4 – 1 defeat was a harsh result for a talented young United side, better results should come as they gain experience, they will be looking to bounce back on Saturday against Annagh at home in the league.
The signing of forward Robbie Hume, should provide plenty of goals if he can form a partnership with Brown, Mills and Butcher as Limavady United now concentrate on improving their League position.

Speaking to Northern Constitution reporter Conor Carlin after the game, United boss Mark Clyde rued his side inconsistency but knows they are a ‘work in progress’ as attention now turns to matters in the Bluefin Sport Intermediate League.
“The game was very poor,” he said.
“We didn't put enough work in both with the ball and without it. It’s very disappointing as this was a great opportunity to progress in the cup.
“Although we where on the wrong side of some strange decisions in the game including the penalty early on we didn't do enough to deserve to progress.
“It's frustrating at times with the players we have that we can be so inconsistent but that's part of building a team and a club with a ethos in giving young players an opportunity.
”In an overall sense, Saturday was not our only display of inconsistency but our season is a work in progress rather than a finished article.”