Future success in the can for Lacada 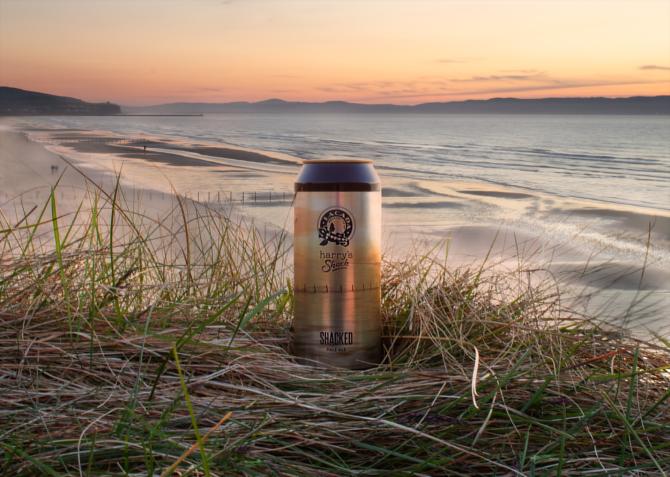 At some time or another, that’s probably the harsh reality for most businesses.

Especially so in times of economic uncertainty, like now, with the UK firmly in the grip of coronavirus.

And so it has proved for the north coast’s first independent brewery which, almost overnight, saw its business under severe threat.

Threatened with a slump in sales and the closing of most of its sales outlets because of the pandemic, Lacada Brewery faced a very uncertain future.

However, with the same determination which saw it launch against all the odds five years ago, the brewery has responded positively to the challenge.

While it has been forced to cut back on staff and production for the foreseeable future, Lacada has expanded into a new market which it hopes will provide some succour in the coming months.

The brewery has just launched its first can called ‘Shacked’ in association with Portstewart restaurant Harry’s Shack and plans to develop more as home drinking threatens to overtake going out.

So, just how bad has it been for Lacada Brewery?

“Since St. Patrick’s weekend, when bars and restaurants began voluntarily closing, prior to being forced to shut, our sales have dropped by around 60 per cent,” admits a spokesperson for the co-operative.

“It’s been very tough. Almost overnight, 80 per cent of our outlets closed, with no real date as yet when they will eventually open.

“We have had to furlough most of our staff but, from the outset, the directors have stepped in and played more of an active role.

“They set up an online shop and a home delivery service through Marc Fairley which has been a lifeline and has helped sustain us to date. Without the online shop and volunteers we wouldn’t have survived for too much longer.

“Production has been hit badly, especially at the beginning when no-one knew what was going on. For a few weeks we didn’t produce any beer and now that has caught up with us as we are struggling to keep up with demand between our outlets and online shop.

“But the positive side of things is that breweries are clean places to be. The level of strict cleaning our surfaces get normally would kill any bacteria,” added the spokesperson.

“It’s hard to know what the future will bring. For the foreseeable future, especially, home drinking will become the norm with people as the hospitality sector will be closed for some time yet.”

As a partial response to that, and almost as a necessity, Lacada broke new ground this month by breaking into the tinned beer market.

“Going into cans was something we were aiming for this year but things happened quicker than we were anticipating,” continued the spokesperson.

“I think it must have been about the sixth meeting the board had remotely during the first two weeks of turbulence when we were on the continuous rollercoaster of will we close or not?

“Just a couple of weeks prior to everything we had brewed a full batch of Shacked for Harry’s Shack. But with Harry’s closed, the thought of pouring the beer down the drain was criminal.

“One of our directors suggested approaching Donal about putting it into cans and selling it. Donal was happy to agree and we spent a bit of money bringing in the equipment.

“Two months later the final product will be in Fairley’s and Marino’s locally but it’s very limited, so how much will be left when readers see this, who knows.

“Although things have been delayed we shoud be canning most of our products by the summer.

“We have invested in a smaller nano brew kit which will be ready soon, too, so we can trial new beers and put them into cans to sell to local outlets before they are released on a full-scale batch.

“I do believe home drinking will be the new norm and for the short to medium term we will be working with less hours and decreased sales.

“Thankfully, at the end of last year, we opened a new share offer to upgrade equipment and the first of that should be arriving in June to allow us to put the beer into cans in large quantities which will enable to us to export better and find new markets.

“However, with the economy going into recession, it is very hard to predict how that will affect things.

“One thing is for sure, though, it will be tough to grow and seek new investors as going forward people won’t want to invest in anything during periods of uncertainty.”

As for the future, it’s fair to assume the world will look a lot different post Covid-19.

“The support from co-owners has been amazing, from people volunteering their time in production, making deliveries and generally running the business.

“If we had to pay a wage for the amount of volunteer hours that have been put in, we wouldn’t have survived passed April.

“That’s not to mention our co-owners who support us by buying our beer and, of course, everyone who buys our beer.

“Without them and their continued support we wouldn’t be here.

“When bars, restaurants and hotels do eventually open things will not be the same. They won’t have the same footfall and draught beer may become a rarity as many bars with less customers could not give the same offering.

“Let’s not forget that people might be scared even when they do open. Some people will not go into a bar, a restaurant or any closed space for quite some time, if ever, and when you add in social distancing I fear for some outlets as I don’t believe too many will be viable and survive this.

“Thankfully, we are members of Taste Causeway and throughout this they have been brilliant, offering advice and support to much of the hospitality sector.

“Now that we are looking into recovery, Taste Causeway are bringing the businesses together and coming up with inventive ways to adapt and move forward over the coming months and years.”