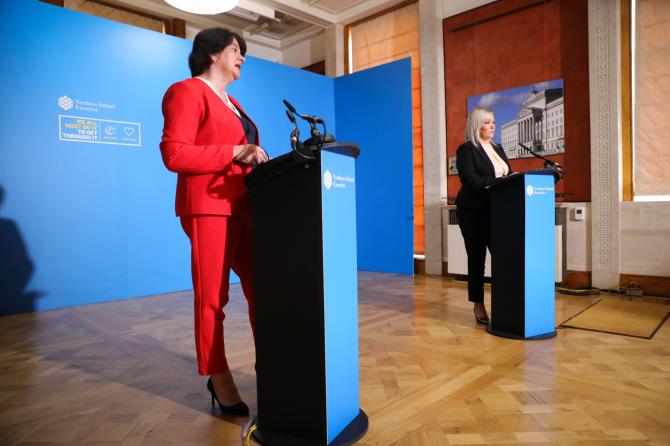 NORTHERN Ireland Executive ministers and their officials have over the past 72 hours been involved in a number of initiatives and critical decisions relating to the Coronavirus emergency.

Groups of up to six people will be allowed to meet other people indoors from today (June 23), First Minister Arlene Foster and deputy First Minister Michelle O’Neill have confirmed.

The move was approved by ministers at Monday's Executive meeting, along with more relaxations for those people shielding during the COVID-19 lockdown because of underlying health conditions.

First Minister Foster told the Executive press briefing: “This afternoon, the Executive agreed that groups of up to six people, not from the same household, will be able to meet indoors from tomorrow. It is recommended that social distancing should still be maintained, along with other mitigations such as ventilation and good hand hygiene. The Executive has wanted to promote family friendly arrangements and this will also be of assistance in relation to informal childcare.”

Deputy First Minister O’Neill added: “This is very positive news and another step in the right direction that will no doubt be welcomed by many. We should point out that this easement comes with strong health advice. People should still keep as much distance as possible between themselves and others who are not part of their household. Visits should be kept short, where possible. We should continue to be meticulous in washing our hands. You are also advised to wear face coverings and should make every effort to make sure the environment is well ventilated.”

Health Minister Robin Swann also announced today that from July 6, those people required to shield will be able to meet up to six people outside their homes, as long as social distancing is strictly maintained.

In addition, people living alone and shielding can form a support bubble from July 6 with one other household.

With fresh guidance letters due to be issued to those impacted, Minister Swann observed: “It has undoubtedly been extremely difficult for those who are shielding. I have listened with great sympathy to what people have told us about feeling isolated and how they have missed their loved ones. I know these easements that take effect on July 6 will be welcome news to many as we move towards the pause in shielding from the end of July.

"However, I am also very conscious that there will be some who are apprehensive about this change.  I would therefore, once again, repeat my call to everyone to continue to observe social distancing and to be considerate of the fact that the people you meet may have been shielding for many weeks.”

People shielding alone and forming a support bubble are not required to implement social distancing with their designated people and can allow them to visit, stay over and spend more time with them.

The second household can be of any size. Both households should not be part of more than one bubble and should continue to socially distance outside their bubble.

It was also confirmed by the Infrastructure Minister Nichola Mallon that there will be a phased return of MOT and driver testing services in the coming weeks,

The Driver and Vehicle Agency (DVA) is planning from July 20 to resume MOT testing for priority vehicle groups, including those vehicles unable to avail of Temporary Exemption Certificates (TECs).

These include taxis and buses due a first time test; vehicles not previously registered in Northern Ireland; vehicles with MOTs that have expired by more than 12 months, including vehicles previously declared SORN and those sold by car dealerships.

MOT testing for other vehicles such as four year old cars and motorbikes, three year old light goods vehicles and testing of heavy goods vehicles, trailers and buses are due to commence in August, with an exact date confirmed once the demand for the initial priority groups has been addressed.

Customers will be sent reminder letters with details of how to book a test at the appropriate time.

Minister Mallon also revealed plans to reinstate some driver testing services in July for those licence categories where testing can be done safely in line with Public Health Agency advice on social distancing requirements.

This includes motorbike driver testing, planned from 6 July, and tests for drivers of buses, tractors and module 4 CPC tests for lorry, bus and coach drivers, planned from July 20.

However, driver theory tests will remain suspended, as DVA officials continue to consult colleagues in the Driver and Vehicle Standards Agency on when the service might resume.

The Minister said: “I will continue to keep other DVA services under review in line with the latest public health advice and following important consultation with staff and unions.  I have made it clear that all services, except those in MOT centres currently being used as Covid-19 testing centres, will resume as soon as it is safe to do so and I will provide further updates in the coming weeks. Covid-19 has caused unprecedented difficulties for all of us and I thank our customers for their patience at this very challenging time.”

With just over a week to go until the deadline to complete the annual Agricultural and Horticultural Census, Agriculture, Environment and Rural Affairs Minister Edwin Poots issued another appeal to participants to complete the survey online.

One of the oldest surveys of its type in the world, dating back to 1847, the census for the first time is being conducted totally online due to the COVID-19 pandemic and in a bid to ease the pressure on farming businesses.

Minister Poots reported the response rate so far to the online census, which helps inform farming policy, has been the highest since the digital option became available in 2003.

Noting the census takes less than 15 minutes to fill in, he urged farmers who had not yet completed it online to do so and added: “This year's deadline to fill in the annual survey is 30 June. I want to sincerely thank those who have already taken the time to complete the digital version of the census and encourage everyone to take part in the survey. However, if you are unable to complete the census in this way then please email DAERAsurveys@daera-ni.gov.uk or call 0300 200 7840 and ask for your local DAERA Direct Office for assistance. Similarly, if you have not already received your unique five-digit code to help you complete the form then again contact DAERA through the above details and a member of the Farm Census team will contact you as soon as possible."