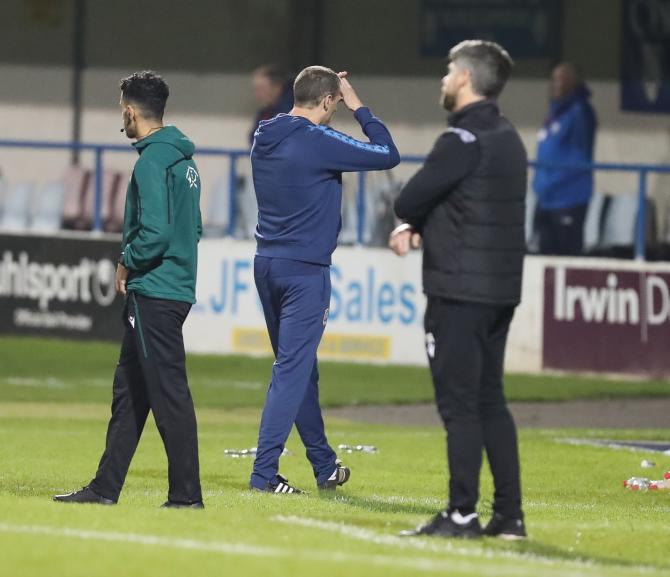 Coleraine manager Oran Kearney must pick his players up now for the start of the domestic season in a month's time.

IT'S the morning after the night before...

The dust has finally settled on an extraordinary European adventure for Coleraine.

And it's a case of 'what might have been' for the brave Bannsiders who came so desperately close to claiming a place in the third qualifying round of the Europa League.

Oran Kearney's men produced yet more heroics to push Scottish Premier League side Motherwell all the way, only to fail at the final hurdle.

In the previous round away to NK Maribor of Slovenia, it was penalties which saw them proceed.

On Thursday, it was the other side of the coin as NI international goalkeeper Trevor Carson saved all three of Coleraine's spot-kicks to send Coleraine crashing out of Europe.

To be fair, there was little more the men in the red shirts could have done.

Outplayed in the opening 45 minutes when it appeared they paid their opponents too much respect, they took the game to their opponents after half-time and never relented thereafter.

The introduction of the peerless Eoin Bradley, a man who, growing up playing GAA, must never dreamed of such nights, was the catalyst for a Coleraine comeback.

And the big striker almost completed the fairytale in the closing seconds of extra-time when his header appeared for all the world to be creeping under the crossbar.

But that man Carson managed to get enough on the ball to divert onto the woodwork and that was that, the rest is history.

To a man, Coleraine players have earned legendary status among supporters who have been forced to watch the journey unfold from afar because of Covid-19 restrictions.

The year 2020 will never be forgotten, that's for sure.