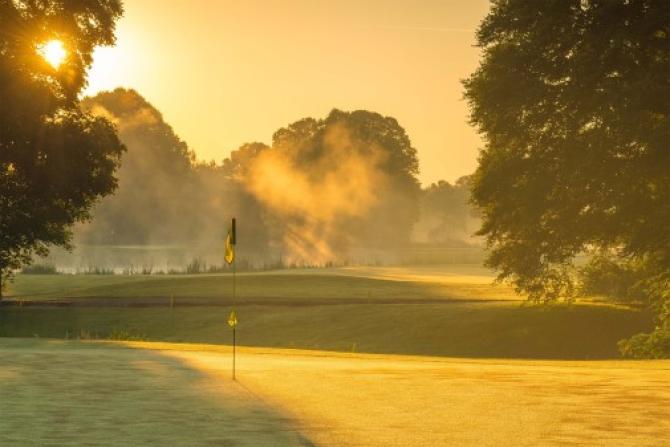 A PERCEPTION of this week's Dubai Duty Free Irish Open simply dropping into Ballymena at short notice amid a global pandemic is very real but closer inspection reveals Galgorm Castle as a tournament venue has been building to this point for years, writes Paul Gallagher.

The truth is, staging international golf events has become part of Galgorm Castle’s DNA. It’s what they do - and they do it well.

Relatively speaking, Galgorm Castle is still a pup considering the Simon Gidman championship course only opened in 1997. By 2010, the historic 220-acre estate had established its place within Irish golf and those fledgling steps into tournament golf began with the first of 10 Northern Ireland Opens plus the ISPS Handa World Invitational Men/Women in 2019.

Gary Henry is Managing Director at Galgorm Castle and has been at the helm for the last 12 years. Through ongoing support from the Board and longstanding partners, not to mention Henry’s forensic attention to detail, there has always been an ability bring the vision to fruition.

So, how did Galgorm get to this point as the latest host venue of the Dubai Duty Free Irish Open?

“It’s a collaborative approach. A lot of hard work by a whole range of people,” says Henry, who has a strong team around him with individuals like Ross Oliver, Galgorm Castle’s Director of Golf.

“We always had a vision to showcase Galgorm, but to also play our part economically in the local area.

“Mid & East Antrim Borough Council and Tourism Northern Ireland have been particularly supportive, two very strong partners that have helped grow events at Galgorm year-on-year. This has been fundamental to our journey and success. Back when we started out hosting George Best Invitational Pro-ams, maybe it was only a dream to one day host an Irish Open and a full European Tour event – but it was always an aspiration,” added Henry.

For over a decade the championship parkland has been very well received by the international players who compete in the Northern Ireland Open. Particular praise is always given to the quality of the greens. For Henry, there is a balance to be struck between tournament set-up and playability for members and visitors, not to mention the ongoing challenge of advanced equipment technology.

“The course is a very good layout. With the evolution of technology, we knew we needed to find ways to make the course longer and create a more strategic challenge for a couple of weeks a year to host top level professional tournaments. We also need a course playable for members and visitors for the rest of the year. It’s easy to make a course really difficult but that’s no use the other 50 weeks of the year. I think we have the right balance,” said Henry, noting the course will play around 7,100 yards this week.

Henry recognises the hard work put in by course manager Rodney McKay and his team. Dedicated winter projects each year enhance the course to create a more strategic challenge for all. Building up to an event like the Irish Open or World Invitational is a 'win-win' according to Henry for the improvements also benefit the member and visitor experience at Galgorm.

So, where will scoring be won and lost this week? Henry suggests players will ease into the round before a more difficult run to the turn.

“If players turn in one or two-under they will be in a good place as the back nine is arguably a chance to open the shoulders,” says Henry, noting that rough is up and finding fairways will be key.

“The par five 10th is one of my favourite holes and will look great on TV. The 13th is another great test. The last four holes are interesting, especially the par five 18th where anything can and has happened over the years. We’ve had eagle threes to sevens to make or break scores. The tee shot at 18 looks intimidating but actually there is room with a generous landing area.”

Preparing the course required some thinking outside the box in such a short window, especially with hosting the Northern Ireland Open supported by The R&A earlier this month.

“It wasn’t the normal programme for preparing for an Irish Open. Typically, that would start in November the previous year. However, we had been planning to host the ISPS Handa World Invitational, so a lot of work was already done. Once that was postponed and we knew we would be hosting the NI Open then the Irish Open quickly afterwards, it effectively became a condensed six-week programme.

“We got the course sharp for the NI Open then the week after we pretty much rested the course, did very little cutting. Essential maintenance was carried out to let air back into the greens and re-energise the grasses.

“Last week we started shining the course up again to reach the levels of presentation for a European Tour event. It has definitely been different preparation than the norm, but it has worked well, and the course is in great shape.”

It’s fair to say operating in a Covid-19 bubble has been more of a challenge.

“No doubt, day-to-day prepping for the event is slower because of the safety procedures and protocols. It’s fine though, we’re used to the new normal – whatever that is,” quips Henry.

“For example, we usually bring all the volunteers, key staff, police, marshals etc on site for safety briefings, but now this is all done on Zoom. It’s just a different working environment, not as easy to have discussions, but it’s the way of the world at the moment.”

Galgorm Spa & Golf Resort is a key partner and the close working relationship is key to the success story and progressive nature at Galgorm.

“The relationship developed 12 years ago when we started hosting tournaments,” says Henry. “We work very closely with Colin Johnston and his team at The Resort and things have progressed to a formal partnership.

“We showcase Galgorm internationally as one destination. Galgorm is a key part of golf tourism for Northern Ireland and the Irish Open will be a fantastic opportunity to not only promote Galgorm but Northern Ireland’s wider golfing product, especially parkland golf.

It will be 67 years since a parkland (Belvoir Park 1953) in Northern Ireland has hosted the Irish Open.

“I believe the more events we can have here at Galgorm, the more we help tourism due to our quality of product and positioning in the market,” added Henry.

“We continue to evolve. Hosting the Irish Open is a huge honour for us and for everyone involved. It’s recognition for all the hard work over the years. It’s great to see the likes of Open champions Shane (Lowry) and Pàdraig (Harrington) here this week. Ultimately, we want the players and officials to go away with great memories of their week at Galgorm.”

And as far as final preparations go?

“Everything is on schedule, touch wood, and as per the programme. There are always a few curveballs but that’s normal. We’re good to go,” said Henry looking forward to a historic week for Galgorm...