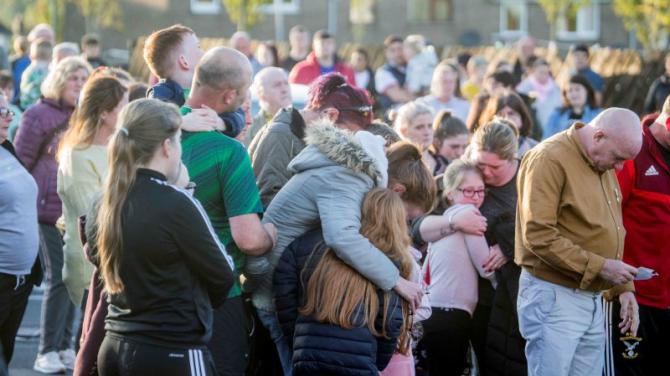 HUNDREDS of people gathered in Ballykeel 2 estate this evening to show their support and sympathy to the family of local schoolgirl, Brooke Reid McMaster who lost her life in a house fire on Wednesday night.

The vigil, at the junction of Orkney Drive and Staffa Drive was only a short distance from the scene of the fire which claimed the life of the Dunclug College pupi..

Members of the McMaster family, obviously heartbroken, were comforted by friends and neighbours who turned out in large numbers to remember the youngster.

Martha McMaster had earlier emotionally described her daughter as a ‘lovely, well mannered and talented girl’.

And those words were echoed by Dunclug College Principal Ruth Wilson who said that Brooke was keen on piano, sport and added that she was a credit to the family.

The close knit community of Ballykeel have been truly stunned by the tragedy and a gofund me page aimed at helping the family through the traumatic period has received huge support.

More than £4500 had been pledged by Thursday afternoon just hours after it was set up.

Forensic teams have been at the scene today assisting the police and fire service investigation into the cause of the tragedy.

Earlier today, the Mayor of Mid and East Antrim had extended condolences to the family on behalf of everyone in the district.

Councillor Peter Johnston said: “The thoughts and prayers of all those at Council, including our Elected Members, Chief Executive and staff, go out to the devastated loved ones of both the young girl and man who lost their lives so suddenly in separate incidents in the Ballykeel area.

“Our community is suffering a deep sense of pain. In the days, weeks and months ahead, we will continue to pull together as a community and offer our unwavering support and care to our friends and neighbours following these heartbreaking tragedies.

"My thoughts are also with our brave emergency services and I thank them for their efforts."