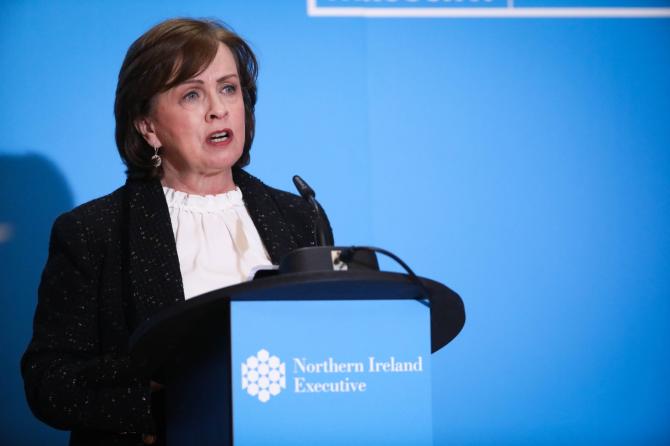 ECONOMY Minister Diane Dodds has written to Cabinet Office Secretary Michael Gove urging him to ensure unfettered access for Northern Ireland freight being transported to Great Britain through the Republic of Ireland.

The Minister has taken the step after Department for the Economy research revealed that at least 20% of Northern Ireland accompanied Heavy Goods Vehicle (HGV) traffic travels through the Republic of Ireland, predominantly Dublin Port, on its way to the Great Britain market.

The analysis suggests that there are around 80,000 accompanied HGV trips made via this route on an annual basis.

The Minister said: “We have been aware that a significant proportion of trade in goods travels via Dublin to Holyhead – particularly in relation to our agri-food sector. This route ensures that many can meet delivery slots for supermarket distribution centres.

“Until now, there had been little statistical information to back up the anecdotal evidence, however my Department recently commissioned research which revealed more details on the volume of traffic using this route.

“The National Government has committed to protect our place in the UK internal market and to guarantee unfettered access for our products. It is clear that if 20% of this trade is moving via Dublin Port to GB because it is a pragmatic measure for their business, then the commitment to unfettered access must also address this trade route.

“If nothing is done to ensure that goods moving via Dublin are treated in the same way as NI goods leaving from Belfast or Larne, then the Government is not fulfilling this promise.”

The Minister has asked Mr Gove to urgently raise this matter with the Irish Government so that practical arrangements are put in place that allow for NI goods to transit through Dublin in the same manner as they would from a local port.

The research – which was carried out by Citi Logik – used mobile phone data to extrapolate freight movements. It found also that 57% of HGV accompanied crossings between NI and GB go through Belfast and 22% go through Larne.