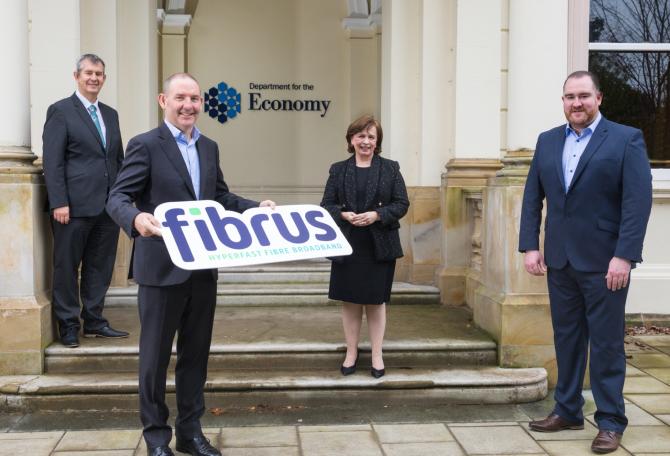 ECONOMY Minister Diane Dodds today announced the contract for the delivery of Project Stratum has been awarded to Fibrus Networks Ltd.

Project Stratum represents a £150million investment by the UK government, allocated to the Department for the Economy as part of the Confidence and Supply Agreement, alongside £15million by the Department of Agriculture, Environment and Rural Affairs, as well as a substantial investment by Fibrus in network build costs.

The project aims to bring next generation broadband services to premises across Northern Ireland currently unable to access speeds of 30 megabits per second or greater.

Commenting on this significant milestone, the Minister said: “After a competitive and very robust procurement process, I am pleased to announce that the contract has been awarded to Fibrus.

"This announcement means that we are one step closer to bringing next generation broadband services to those businesses and people who need it most.

"Fibrus proposes a full fibre solution, capable of offering speeds of up to 1 gigabit per second to almost 97% of premises in the target intervention area. Deployment of the new infrastructure is expected to commence immediately and implementation will run until March 2024.

“While always recognised as important, the pandemic and restrictions we have all had to live under have underscored the importance of broadband connectivity. Project Stratum will transform the broadband connectivity landscape for many of our citizens and businesses across primarily rural areas of Northern Ireland.”

The Minister continued: “The investment of £150million by my Department, combined with £15million from DAERA and the investment by Fibrus in the project, will deliver gigabit-capable broadband infrastructure to more than 76,000 premises in the intervention area.

"My Department will work closely with the supplier and, through continued engagement with DCMS, will deliver infrastructure to serve all premises in the target intervention area, including those not currently in scope, as soon as possible.”

Welcoming the award of the contract and the opportunity to work with the Department to deliver this much needed improvement to broadband access for rural communities, Fibrus Chair Conal Henry commented: “This investment partnership with the NI Executive positions Northern Ireland as a digital global leader.

"Full fibre broadband is key to unlocking the full economic and social potential of our rural communities and is as vital a part of our 21st century infrastructure as power, water or transport.

"This investment enables towns, villages and rural communities to change the narrative, keep people and communities connected and facilitate the increasing demand for working and studying at home. The benefits of full fibre broadband are more relevant now in a Covid context than ever before."

Outlining the investment Fibrus has made to date, Mr Henry added: “In South Down, Mid Ulster and now in the North Antrim area we have already invested £65million to bring full fibre broadband to regional towns.

"The Stratum project, in partnership with the NI Government, brings the total investment in Fibrus’ network over the next 4 years to £350million, radically accelerating and extending FFB to those that need it most. Today's announcement is a milestone for Fibrus and for Northern Ireland.”

In recognising the importance of Project Stratum to rural communities, the Department for Agriculture, Environment and Rural Affairs committed early on to contributing £15million to the project.

Commenting today on the award of contract, Minister Edwin Poots said: “As a rural dweller I’m aware of the issues and disadvantages faced with low or poor broadband speeds.

"This has further been demonstrated during the current Covid crisis where rural businesses, schools and dwellers are even more dependent on good quality broadband coverage to stay connected with friends, family and employers.

“I am therefore delighted that my Department has allocated £15million towards this positive project. This additional funding will facilitate further roll-out of reliable broadband speeds into rural areas, which I hope will lead to better long term sustainability of rural areas and growth in rural businesses.”

Project Stratum complements the UK Government’s ambitious broadband targets in seeking to provide gigabit-capable broadband to the whole of the UK as soon as possible.

UK Digital Secretary Oliver Dowden said: “This £150m investment from the UK Government will help deliver lightning fast gigabit speeds not just to Northern Ireland’s towns and cities but also to rural areas stuck in the digital slow lane. As the impact of Covid has shown us, it is more important than ever that we connect people to their families, jobs and services.

"With Fibrus on board, we can bring the benefits of next generation broadband speeds to tens of thousands of homes and businesses – helping people work remotely, take advantage of new tech and boost economic productivity."