Fifteen years before the former Coleraine midfielder, Paul Ross and Brendan Kirgan displayed their talents at the west London ground 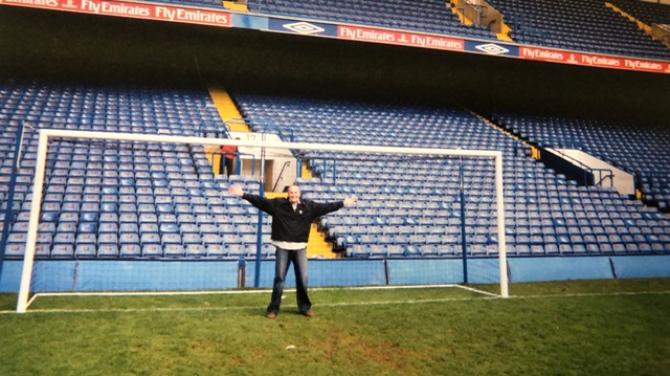 HISTORIC, yes, but last Sunday wasn’t the first time a Ballymoney man has stepped out on to the hallowed turf at Stamford Bridge, home of Premier League giants Chelsea.

Fifteen years before Brad Lyons and Morecambe in the FA Cup, there was Paul Ross and Brendan Kirgan!

“It was May 2005, the final game of that season against Charlton Athletic and we won 1-0 with a Makele penalty to win the league for the first time since 1955,” recalls Paul, there to watch the match with fellow Chelsea supporters.

“On the Monday morning we took a last walk around the ground before heading to the airport.

“Myself and ‘Hoser’ noticed a door open at the Matthew Harding end so we went through and up the steps to look at the pitch.

"The cleaners were in and never took any notice of us so we went down to the pitch, went on and took photos of us in the net that Makele scored his penalty.

"Not content with that, we then went to the club shop and bought a ball and got the guy to blow it up.

"We met a few of the other guys that were on the trip with us and they didn't believe us. They came on for a couple of minutes then got scared.

"Hoser and I then went on to the pitch, hit penalties and ran up and down the pitch passing and hitting shots and crosses - a day we'll never forget.

"Eventually, after more than half an hour, an irate security man came roaring down the pitch and escorted us off - but not before I pinged over a cross for Hoser to volley in."

And while Brad Lyons has Chelsea starlet Billy Gilmour's shirt to remind him of his experience in west London, Paul has his own mementos of an unforgettable day - the grass from the penalty spot and the ball...

As Irish League legend Gerry Flynn might say - 'you couldn't make it up!'

* Have you enjoyed a similar experience - managed to get in somewhere you shouldn't? If so, let us know. E-mail sport@thechronicle.uk.com or simply post on our facebook page...