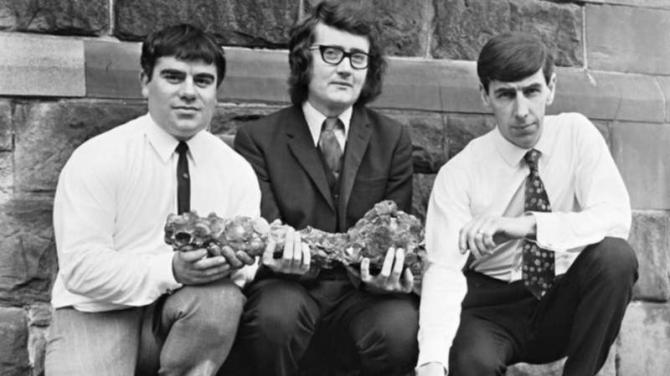 FEBRUARY marked 50 years on from what was one of the most significant underwater finds in maritime history in the North West - and two Strabane men were part of the historical find.

Archie Jack and Pat Stewart were among the 13 divers from the City of Derry Sub Aqua Club who found the final resting place of La Trinidad Valencera – a Spanish Armada ship wrecked off Kinnagoe Bay, Co Donegal, in 1588.

The refitted 1,000 tonne Venetian merchant ship was commandeered by the Armada in Sicily and was one of 120 galleons that sailed from Portugal under the flag of King Philip II in May of 1588.

When it sank on September 12, of that year, over 400 sailors and soldiers abandoned ship, making it safely to shore.

The wreck had lain dormant and undiscovered for centuries, until the team of divers found the once mighty vessel.

The club members knew roughly where the galleon was said to have sank but previous dives had been fruitless.

They had searched the bay numerous times with no luck but on February 20, 1971, after about 30 minutes diving, they discovered a bronze cannon sticking from the rocks.

The weather had been bad and as the divers gathered at Kinnagoe, they were put off venturing too far out.

Their dive would be much closer to shore than originally planned.

The Strabane men - Pat and Archie - were the first two divers to clap their eyes on the wreck, resurfacing shouting: "cannon, cannon".

From the start the divers agreed that the importance of the site was too great to benefit any individual, thus setting in motion a recovery project that unveiled multiple cannons, incredible artefacts, textiles, instruments and weaponry from the site over the next few years.

Many of the items are now on display in a permanent exhibition in the Tower Museum in Derry city.

To celebrate the milestone 50th anniversary of the find, the Tower Museum released new content online, including a virtual 360 degree tour of the exhibition, photographs of the recovery as well as original documents and essays written by the divers at the time.

Due to COVID-19 restrictions the exhibition 'An Armada Shipwreck- La Trinidad Valencera' has been closed to the public since March 2020.

The virtual tour, digitised in partnership with The Nerve Centre, will allow visitors from anywhere in the world to view what the members of the City of Derry Sub Aqua club discovered 50 years ago.

There is also correspondence and photos donated to the museum by the divers, recording the sheer awe and excitement at what they had discovered on the seabed.

Material relating to the wreck has also been contributed by the Inishowen Maritime Museum.

Roisin Doherty, curator at the Tower Museum - home to an Armada exhibition - said the dive team "are an integral part of this story".

"The team were determined to carry out the excavation with very few resources and at their own personal risk and it's thanks to them that we have this snapshot of history to share with people today," she said.

The increased digital content is part of the TIDE project, where the museum are currently researching and sharing resources regarding the Spanish Armada, World Wars and Migration with other regions in the Interreg Atlantic Area, including Devon, Donegal, Madeira, Cadiz, Cantabria and Saint Nazaire.

The TIDE project is funded by Interreg Atlantic Area Programme.