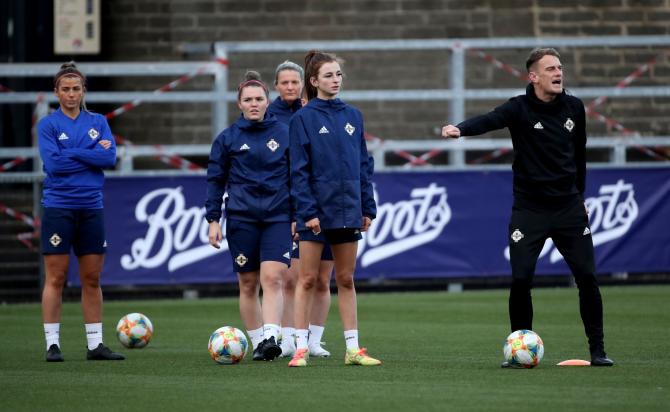 Dean Shiels is earning rave reviews as part of the coaching set-up with the NI Women's squad.

DEAN Shiels has been named as the new manager of Dungannon Swifts.

The former NI international striker takes over from the recently departed Kris Lindsay at Stangmore Park.

Part of the coaching set-up with the NI Women's squad under his father Kenny, this will be the 36-year-old's first managerial role.

The news was announced on Thursday evening - just 48 hours before the Swifts are due to take on high-flying Coleraine, managed by Dean Shiels' brother-in-law Oran Kearney.

However, Dean will not be in charge this weekend - interim manager Dixie Robinson taking charge of team affairs this Saturday.

Shiels, who won 14 caps for Northern Ireland during a long and successful career, will take over after this weekend and admits he's looking forward to getting started.

"From the moment I met with the club it felt the right decision for me and I'm grateful to the chairman and the board for the opportunity.

"The club is going through a difficult period on the pitch but I'm excited to take it head on.

"I have a strong belief on how the game should be played and I will give everything to put a team on the pitch to compete and be successful," he added.

More on this story to come...