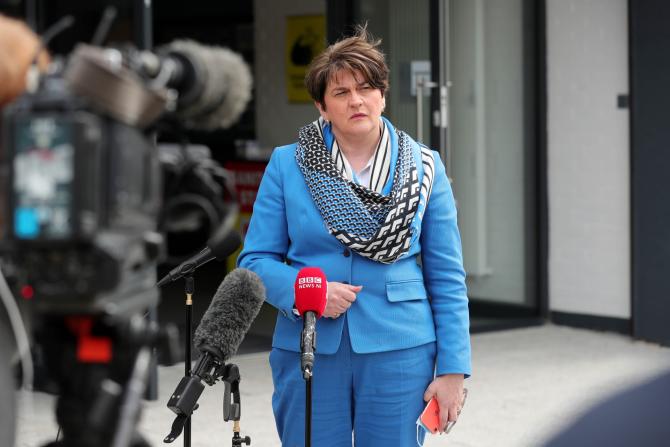 ARLENE Foster will make one of her first public appearances following her resignation as First Minister and leader of the DUP when she visits Coleraine on Sunday.

Mrs Foster, who announced earlier this week that she will step down as party leader on May 28 and as First Minister at the end of June, is due to attend an event in St. Patrick's Church marking Northern Ireland's centenary.

Around 90 dignitaries have been invited to attend what is believed to be the first significant civic occasion of any type since lockdown measures were imposed last year.

Among those accompanying the First Minster to Coleraine will be crown representatives, MPs and MLAs with the service being hosted by the mayor of Causeway Coast and Glens Borough Council, Alderman Mark Fielding.

Alderman Fielding admitted he was disappointed the public would be excluded because of Covid-19 restrictions but expressed his delight that such an historic occasion was being celebrated in his area.

Mayor Fielding said he was looking forward to further events during centenary week including the planting of native oak trees in each of the borough's seven District Electoral Areas (DEAs).

“2021 is a very significant year in our history as we mark 100 years of Northern Ireland,” continued the mayor.

“Causeway Coast and Glens is an iconic part of Northern Ireland and on this historic occasion we want to celebrate the very best of the borough."