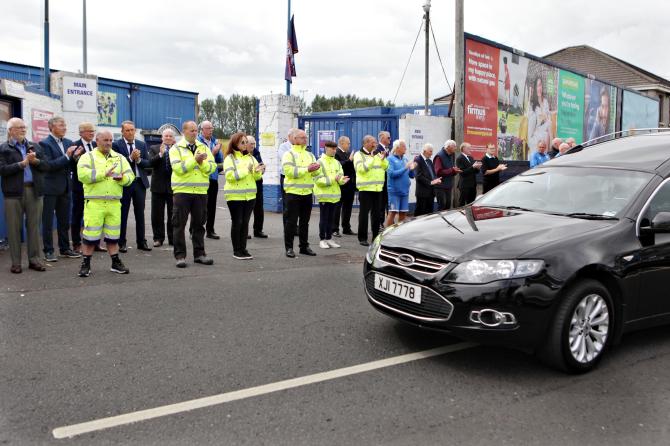 MOURNERS at a Service of Thanksgiving for the life of Victor Hunter have heard how the former Coleraine player, coach and manager's contribution to his beloved Bannsiders 'will not and can not be forgotten.'

Describing it as 'an honour' to pay tribute to the 84-year-old, Coleraine FC chaplain, Rev Robert McMullan, said everyone inside Coleraine's First Presbyterian Church had lost 'a friend, a mentor and a role model' with Victor's passing.

"The title legend is often misused, too easily bestowed on someone, but in the case of Victor it sits easily, worthily, even though he would have dismissed it with a wave of his hand and a disparaging nod of the head.

"But above all else, Victor was first and foremost a supporter. He was a Bannsider."

Twice capped by Northern Ireland, Victor made 472 appearances in 15 years at the Showgrounds before taking on numerous roles, including being an honorary life president a number of years ago.

"This is the legacy that Victor has left behind," continued Rev McMullan.

Victor's son Barry, himself a former NI international, spoke emotionally about his father and of how the family had received great support from the local community in recent days.

He spoke of the many great memories he had of growing up, adding that he wanted the day to be a celebration of his dad's life.

"We all have so many great memories and that's what we want to focus on," he said.

Among those attending the Service of Thanksgiving were players and officials from Coleraine FC, former team-mates of Victor from his playing days, players he had developed through the club's youth ranks, members of the media and supporters of the Danske Bank Premiership club.

Following the service, the funeral cortege made its way through Coleraine town centre to Coleraine Cemetery, stopping for one final time at the gates of the Coleraine Showgrounds where mourners, including former Coleraine managers Marty Quinn and Kenny Shiels, had gathered to pay their respects.

* More coverage on the Service of Thanksgiving for Victor Hunter in Tuesday's Chronicle.