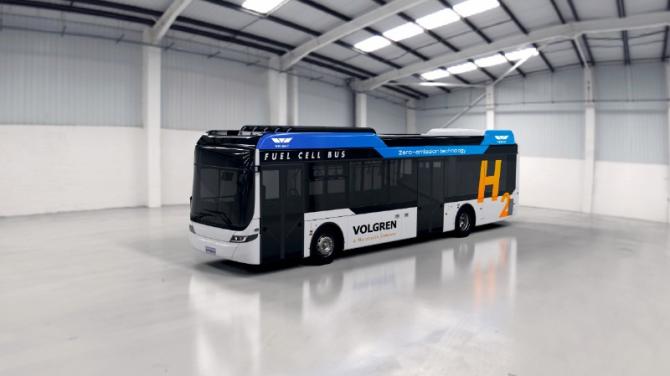 Wrightbus has signed a landmark deal with Australia’s number one bus body builder that could open up a significant export market.

And it is great news for workers at the Ballymena plant.

Wrightbus has partnered with Volgren to provide its groundbreaking hydrogen fuel cell powertrain technology for the manufacture of two zero-emission hydrogen single deck buses which will be the first European-Australian hydrogen combination in the country.

The innovative hydrogen powertrains - which will be built in the Wrightbus Ballymena factory - will use the same technology developed by Northern Ireland-based Wrightbus to launch its world-first zero-emission StreetDeck Hydroliner double deck and GB Kite Hydroliner single deck buses.

Wrightbus leaders hope the first two buses will be the start of many as Australia looks to replace tens of thousands of buses with zero-emission vehicles over the next decade to hit its net zero commitments.

The deal has been praised by the UK Government’s Department for International Trade, which provided assistance to Wrightbus as it looked to break into the Australian market.

The vehicles, which will be powered by Wrightbus NexGen hydrogen fuel cell powertrains, will be trialled in Australia, where it is hoped they will form part of the country’s push towards the introduction of hydrogen power.

Since first entering passenger service in 2020, StreetDeck Hydroliners have clocked up a million miles, preventing 1,700 tonnes of CO2 from entering the atmosphere on those bus journeys. No harmful emissions are emitted from the vehicles, with water vapour being the only emission.

The Wrightbus-Volgren buses are expected to be ready for trial in the first few months of 2023.

Wrightbus CEO Buta Atwal said: “We’re incredibly proud to be partnering with Australia’s number one bus body builder in Volgren. Like us, Volgren is always on the cutting edge of new and emerging technology to drive the industry forwards.

“We know from our extensive experience the significant part hydrogen can play in the decarbonisation of public transport and we believe the scope for uptake across the Australian market is huge as the country makes the vital switch to zero-emission vehicles. We’re excited to be in from the start.

Buta Atwal said the partnership, coupled with the company’s expansion plans in Europe being led by its recently-appointed European Chief Commercial Officer, would ensure the Wrightbus name would be known on the global stage, securing the UK’s reputation as a leader in zero-emission hydrogen technology.

The deal was welcomed by the UK government, which has today introduced a bill to help bring into force the UK-Australia Free Trade Agreement, its first independently negotiated Agreement in more than 50 years.

Secretary of State for International Trade Anne-Marie Trevelyan said: “Northern Ireland is home to one of the UK’s most dynamic manufacturing sectors, and I’m proud of our work helping companies like Wrightbus get export wins like this. They are paving the way for others to make in the UK and sell to the world.