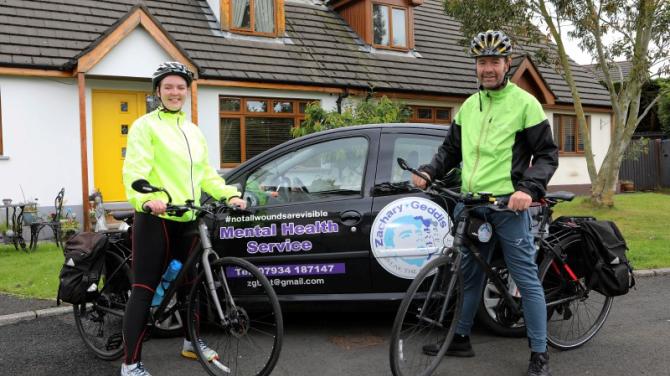 A COLERAINE father and daughter are getting on their bikes for a mamoth cycle next week to raise funds for the charity set up to remember their son and brother who died by suicide.

Terry and Yasmin Geddis will take on the challenge of cycling 800 miles in eight days to raise £5000 for the Zachary Geddis Break the Silence Trust.

Setting off on Saturday, July 9 from their home, the objective is to open a mental health centre for the community of Causeway Coast and Glens.

This will be Terry’s fourth cycling challenge across five years to raise money for their family organisation which was set up in memory of Zachary Geddis, their loving son and brother who died by suicide on 18th March 2017.

To date Terry has personally raised over £25,000 in his previous challenges and they hope to achieve their goal of £5000 by the end of the cycle.

The route this time is straight down the middle of Ireland and back again.

Training since Halloween 2021, Yasmin asked her Dad if he had one more cycle in him before taking on the challenge. He first thought that she was joking but eventually he agreed to every other day and now having shown her dedication, she is now completing the full eight days and 800 miles by his side.

Yasmin says that the reason she wishes to join her father is to do something meaningful with her life for brother and for the clients who have sat in front of her over the past five years and told them their personal stories of ill mental health.

She has never fundraised directly for the organisation and thought bringing herself out of her comfort zone and completing a very hard challenge, both mentally and physically would be the way to put her dedication to mental health awareness to the forefront.

Yasmin had a baby nine months ago and began intense training to drop 15kg and learn how to cycle when Zander was only four months old.

With capacity levels and demand for services within the Zachary Geddis Break the Silence Trust rising to over 200 in recent months, the need for a centre to operate from has grown.

The new facility will have six therapy rooms suitable for mentoring, counselling, and advocacy and two open spaces for their three support hubs along with their educational workshops to be hosted.

ZGBTST currently provides free of charge immediate mental health services and is a referral system for most of the borough’s doctors and NHS mental health organisations.

They recently launched a children’s service focused on ages eight and above providing music, art and counselling as part of a rotational process.

“A new mental health facility is exactly what the community of the Causeway Coast and Glens needs to cater to the growing demand for mental health services,” commented Yasmin.

The remaining costs that are required to secure one year’s rent is £5000 and for this reason Yasmin and Terry are setting off together for one last cycling challenge.

The cycle for suicide has become a well-known campaign by ZGBTST in memory of those who have taken their own lives and those struggling everyday with mental health issues.

Terry is extremely proud of the dedication Yasmin has shown in preparation for the cycle. He is looking forward to having someone join him along the way – a mission which many have set out to do, but none have been able to complete it until now.

He is aware that this is not a task for the light hearted having done three previous charity cycles but this time the route is completely different so the duo have spent months training in different terrain to make sure they are as prepared as possible.

l If you wish to donate to Terry and Yasmin’s venture, they currently have a GoFundMe live: https://gofund.me/6435d22e their journey in training is currently being documented on the ZGBTST Facebook page: Zachary Geddis Break the Silence Trust and will be updated with live videos throughout their journey.