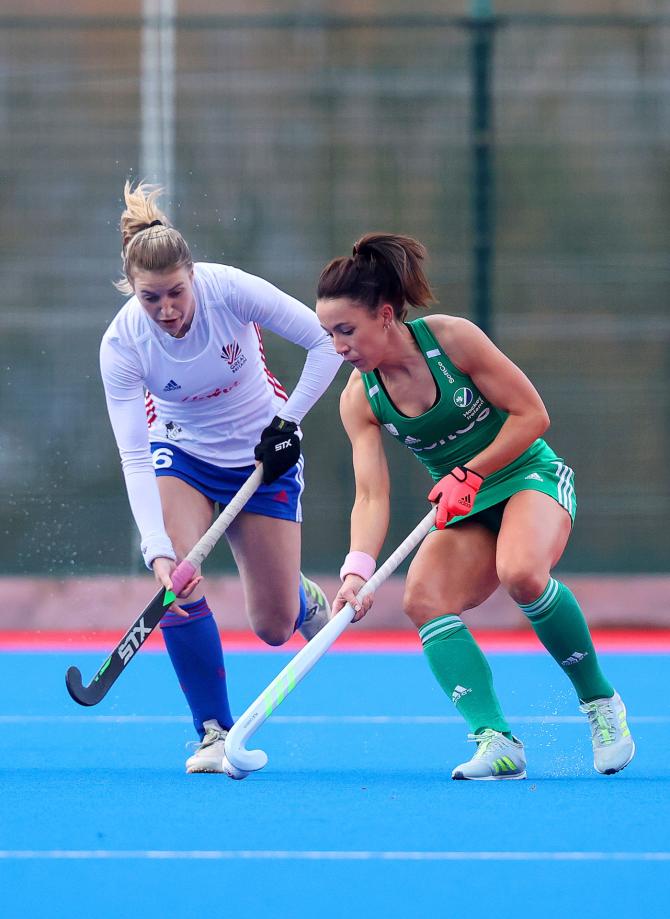 Anna O'Flanagan in action against GB at the recent SoftCo Series.

SITTING on Anna O’Flanagan’s desk are a set of pens that have remained in the packet for almost six years now.

In just under a hundred days, she may finally get around to chucking them out, maybe even burn them. Bought in something of an emotional daze in Valencia, in 2015, the day after Rio qualification was denied by the width of a post, they sit there as a vivid reminder of shattered dreams.

“They will definitely go in the bin once I set foot on the pitch in Tokyo!” the Green Army’s all-time top goalscorer says of that pen set.

“There’s a long way to go and I need to hopefully stay fit and well and play to the best of my ability over the next while to get on that pitch. Maybe I can burn them then!”

For many of her team-mates, the stationary is an odd keepsake but is something O’Flanagan uses to find something of an emotional catharsis in good times and bad.

“I have lots of notebooks and do get slagged over it!” she laughs.

“I find it interesting to write about how I am feeling. You can have so many thoughts going around your head, worries or concerns, thinking about what might happen.

“When you write it down, your rational brain kicks in and the act of writing means you can rationalise it a bit better and wonder ‘why was I thinking about it like that?’ When you put pen to paper, it can look a bit ridiculous. It helps get a sense of reality!”

It is something which helped her through the tough lockdown times when she struggled for a sense of purpose. O’Flanagan has put her career on hold to, first, pursue and succeed in the run-up to 2018 World Cup silver, and then again for this Olympic push after a stint with Deloitte in the Netherlands.

But when Tokyo was put on hiatus, it had her questioning what next as the limbo of whether or not the Games would go ahead was played out.

“There was so much uncertainty for everyone in the world. For us, as athletes, we thrive off certainty and being planned. What gets me through training and those tough days is really visualising being at that next major tournament, being at the Olympics, competing and winning games.

“I went through a period when I just couldn’t see it, I couldn’t feel it. The world seemed so upside down that the thought of being able to travel to an Olympics seemed so far away.

“That was when I struggled the most. The last couple of months, there’s been such positive communication coming from Tokyo and also seeing other sports teams and events happen.

“Now, I can see it unfold. It will be weird and different for sure but being able to visualise it makes it seem more real, more tangible. We have to stay focused and assume it is happening, but I am not as anxious now that it will be binned at any second.

“That was so hard when we were training and trying to do your best, doing it with that in the back of your mind. I don’t have that worry anymore.”

The nature of the current world, though, means the road remains a bumpy one with plenty of twists and turns. The most recent example, last week’s proposed trip to Malaysia being called off at the last minute.

“Malaysia was a disappointment, but we are still able to train and play and this just gives us a perspective on how sport is cruel and your whole sporting career can change overnight. You have to treasure each day.”

A feature of the Green Army story, though, is how they roll with the punches and while other countries may be new to such slings and arrows of fortune, O’Flanagan says there will be few better outfits capable of coping.

“We always say we are used to playing in front of no supporters. An empty stadium in Japan is no different to training in Abbotstown every week. Those little things add up.

“We saw from the GB win that what we are doing here has been going well and the year probably has stood to us as a group. If anything, we enjoy doing it when our backs are against the wall.”

* Irish international hockey star, Anna O'Flanagan, is an ambassador of the Olympic Federation of Ireland’s new Olympic Schools Challenge, ‘Road to Tokyo’. The interactive challenge will engage with school children, encouraging them to get more active and teaching them about Tokyo and the Olympic Games.

The challenge is part of the Olympic Federation of Ireland’s ‘Dare to Believe’ schools programme, which is proudly supported by FBD, and sees Team Ireland calling on schools and families across the country to join them on the Road to Tokyo from May 4th to May 31st. You can find out more here: https://www.daretobelieve.ie/roadtotokyo