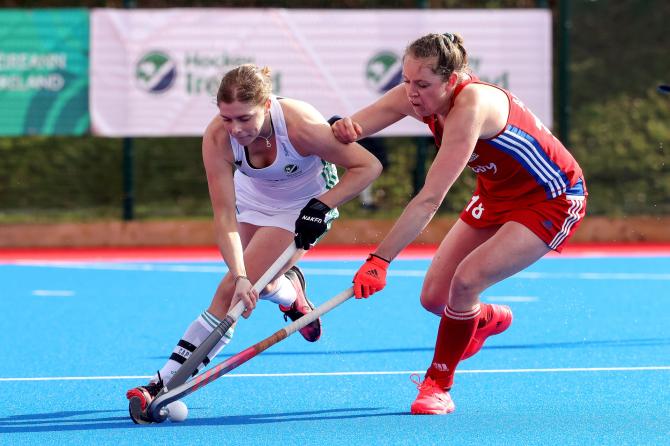 Ireland captain Katie Mullan (left) hoping to lead her team to glory in Holland this week.

IRELAND'S women take their first step of a huge summer of action this Saturday as they take on world number ones the Netherlands on day one of the EuroHockey Championships in Amstelveen (2.30pm Irish time, Live on RTE2).

It is a repeat of 2018’s World Cup final with the Green Army hoping fresh legs and a full focus on this date will close the gap from that day, the Dutch winning out 6-0 in London.

The Dutch have lost just one fixture of any kind since that day, picked up the 2019 European title as well as the 2019 and 2020 Pro League crowns. Indeed, all told, they have not lost a European fixture in normal time since 2011 while Ireland’s last win over the Dutch dates back to 1963, giving something of a measure of the challenge ahead.

While those stats show the Orange power, star goalkeeper Ayeisha McFerran – twice a nominee for World Goalkeeper of the Year – says the Irish mindset has them relishing this challenge.

“We are very driven and we don’t go into any game thinking we’re going to lose it,” she said this week. “We’re not about that. Over the past couple of years, we’ve really developed so we never think ‘let’s keep the score down’.

“As an Irish team, we wanted to flip that mindset and go forward. We want to move up a ranking in the world and the only way to do that is by winning medals. First, though, we need to put in performances, myself included.”

On the outside, the temptation may be to look further down the road to July’s Olympic debut, this tournament has a range of opportunities and targets in the Amsterdam suburbs.

There are three World Cup tickets on the line; there are also four direct qualification spots for the 2023 Europeans which moves to a new format after this event. Both of those ambitions would be likely be achieved with a first ever run to the semi-finals.

And, perhaps more intangibly, the Green Army will be aiming to build momentum both on the pitch and off it with a bandwagon of fans getting their first competitive glimpse of the side since the November 2019 Olympic qualifiers.

It is an imposing initial four-team group with the three medalists from the World Cup – Spain won bronze in 2018 – joined by underdogs Scotland.

Thirteen of the Irish silver winning panel will hit the turf at the Wagener Stadium with Deirdre Duke increasing that number as a late call-up with Sarah Torrans missing out on her first ranking tournament through injury.

Captain Katie Mullan leads out the side once again while the forward line will have a familiar look with record goalscorer Anna O’Flanagan – 81 goals and counting – lining out up top with Duke, Nikki Evans and the returning Naomi Carroll who is back after an ACL injury.

Michelle Carey is the fresh-face in this area of the field, the uncapped UCD player – a niece of GAA President Larry McCarthy – offering an exciting and innovative option. Her formal international debut will come against the Dutch in front a crowd of up to 3,500 having impressed in behind closed doors fixtures.

Chloe Watkins, Lizzie Colvin, Nicci Daly and Sarah Hawkshaw provide the midfield dynamism with Roisin Upton likely to join them coming out from the back.

Defensively is where much of the shake-up has been of late but Lena Tice, Hannah Matthews and Megan Frazer are all available having missed out on recent wins over the Scots.

Zoe Wilson and Barr twins Serena and Bethany miss out due to long-term injury, allowing the likes of Hannah McLoughlin to make a big impact. One of Ireland’s most accomplished players on the ball, she is another making her ranking tournament debut.

At the opposite end of the spectrum, this will be Shirley McCay’s eighth – and final – European Championships as she adds to her incredible tally of 306 Irish caps.

On the goalkeeping front, McFerran is likely to don the number one shirt with support from Lizzie Murphy in her second European campaign.

They look forward to Saturday’s initial salvo before meeting Scotland on bank holiday Monday and complete the group stages next Wednesday with a potential battle royale against the Spanish.

A top two place brings a semi-final on Friday June 11 with the final on Sunday June 13.