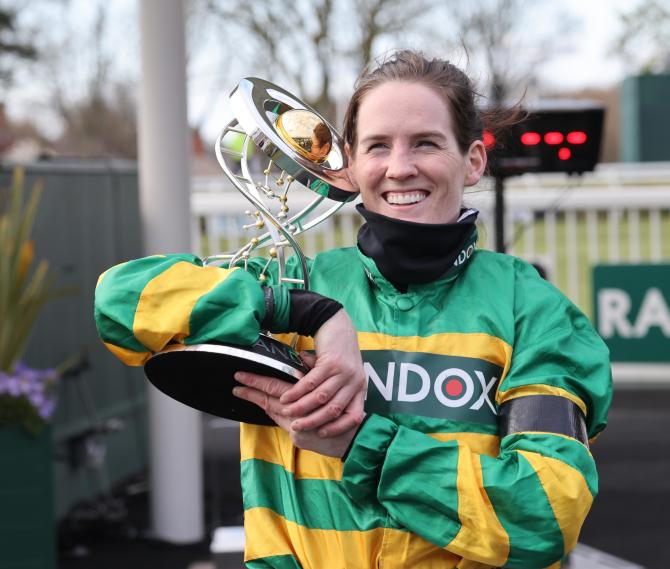 Rachael Blackmore became the first woman to ride the winner of the Aintree Grand National with her success on Minella Times Photo: Edward Whitaker/Racing Post

RACHAEL Blackmore will be honoured with the 2021 Irish Racing Hero Award at the annual Horse Racing Ireland Awards next month.

Earlier this year, Rachael’s pioneering exploits were hailed the world over and her achievements went hand-in-hand with an incredible period and unprecedented success for Irish-trained, Irish-ridden and Irish-bred horses.

Rachael was simply brilliant at the Cheltenham Festival in March where she became the first woman to claim the Leading Jockey award with six winners, a figure that has only been topped by Ruby Walsh.

From Tuesday’s Champion Hurdle success on Honeysuckle, right through to Friday’s Triumph Hurdle victory on Quilixios, the Killenaule native dominated on the track. She recorded doubles on the middle days of the festival winning on both Bob Olinger and Sir Gerhard on Wednesday and on Allaho and Telmesomethinggirl the following afternoon.

Rachael’s headlining act reached new levels at Aintree only weeks later where she truly ascended into superstar status. She became the first woman to ride the winner of the iconic Grand National with her success on Minella Times described as 'historic' by President Michael D Higgins, 'a truly amazing achievement' by An Taoiseach, Micheál Martin, with Minister for Agriculture, Food and the Marine Charlie McConalogue T.D, saying, 'You are once again a history maker and have done Ireland proud.'

“Not only was she the first woman to ride the winner of a championship race at Cheltenham, but Rachael also became the first woman to win the Leading Jockey award at the festival. It is remarkable that her six winners included five at Grade 1 level.

“Her Aintree Grand National victory made headlines all over the world and that accomplishment alone will resonate with so many within the racing industry and beyond.

“Rachael has become more than a role model; she is a true icon of our wonderful sport and a most fitting winner of the 2021 Irish Racing Hero Award.”