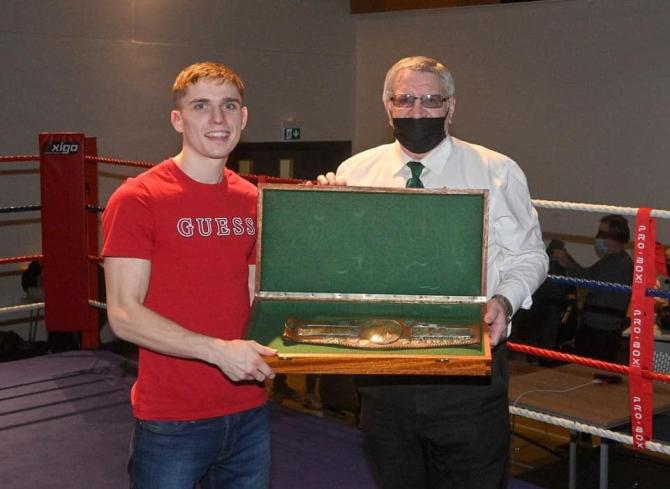 Swatragh's Dominic Bradley was named Boxer of the Tournament at the recent Ulster Elite Championships.

Bradley (22) out scored Holy Family’s Rory Lavery 4-1 in the lightweight final at Belfast’s Girdwood Community Hub to put himself firmly in the frame for Birmingham next summer.

“The Ulster Elite Championships are a big part of the selection process for the Commonwealth Games so that’s that box ticked,” admitted the Ulster University sports science student.

“I’ve lost in an Ulster Elite final before and I’ve lost in two Irish finals so I’m over the moon to finally land this one.

“I’ve been working hard in training and thankfully all the preparation has paid off,” he added.

Formerly of the Errigal Club in Garvagh, Bradley now fights out of the Emerald club in west Belfast under the watchful eye of former Ulster and Irish champion JP Delaney.

“It was a difficult decision leaving Errigal having been there a long time but I felt I needed a change and so far things have worked out well for me,” continued Dominic.

“I feel like I’m going from strength to strength and this win can only help me.

“The Commonwealth Games close to home would be something really special but there’s no point in being there if you don’t make the most of it.

“The aim would be to try and win a gold medal and we’ll see what happens after that,” he added.

Now, with a first Ulster Elite title under his belt the focus turns to next summer's Commonwealth Games in Birmingham and, hopefully, the 2024 Olympic Games in Paris.