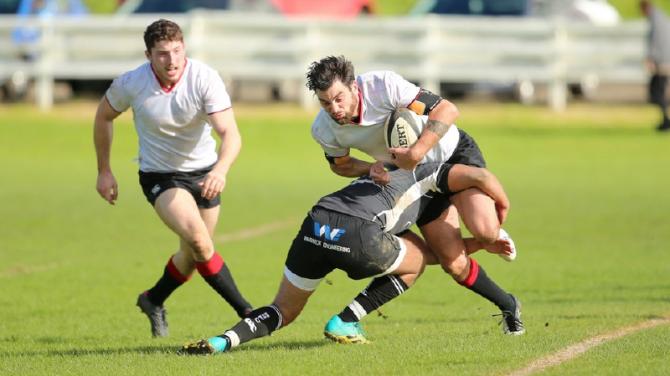 Limavady took the opportunity to rest a few players and it was to the credit of their replacements that the Roesiders secured another fine victory. The game was played in beautiful conditions which presented the perfect oppurtunity for quick flowing rugby which looked to be the aim of both sides from the get go.

The first score came after only a few minutes when Ballymena put together a series of passes and managed to cross the line however the visitors failed to convert to the delight of the home support. From the restart Limavady seemed to get their radar adjusted and started to ask questions of the Ballymena defence. They were rewarded after thirteen minutes when, following a good exchange of passes between Daniel Irvine and Mark Woods, the latter timed an expert turn of pace to outstrip the Ballymena defence. Luke Faulkner converted to put Limavady into the lead, a lead which they were to protect right until the final whistle.

The rest of the half was a closely contested affair with both sides seeking to create chances but both defences holding firm.At the interval, it was a case of narrow margins as the home side enjoyed a slender two point advantage.

After seven minutes of the second-half Limavady stretched their lead early on when Mark Woods spotted a gap between the Ballymena centres and again his pace was too much for the visitor’s defence as he crossed over. With the posts in his sights, Luke Faulkner stepped forward for the second time in the game and duly added the extras.

That was not all she wrote as the Braidmen bridged the gap after some tenacious work from the Ballymena pack, following good work by Ballymena’s hooker, the ball was moved wide for their second row to touch down. The conversion was missed to leave Limavady with just a little breathing space.

The game continued as it had all match with both sides seeking to play good rugby and thankfully it would be Limavady who would next trouble the score board. This time it was Limavady’s other wing, Stewart Roddy, who finished off another free flowing move Luke Faulkner looked to make it three from three but he failed to slot the ball between the posts.

With the minutes ticking away Ballymena pressed for another score as they aimed to reduce the deficit. They were awarded a penalty following an infringement in front of the posts which they chose to kick to move them to within a one score deficit.

The last few minutes proved to be anxious for Limavady players and supporters alike as Ballymena pressed for a winning score. They almost achieved this when their right wing scored in the corner. With the game now resting on the final kick of the game the Ballymena player struck the ball well but much to the delight of all belonging to Limavady, the breeze carried the ball just wide of the left hand upright meaning the Roesiders held on for victory.