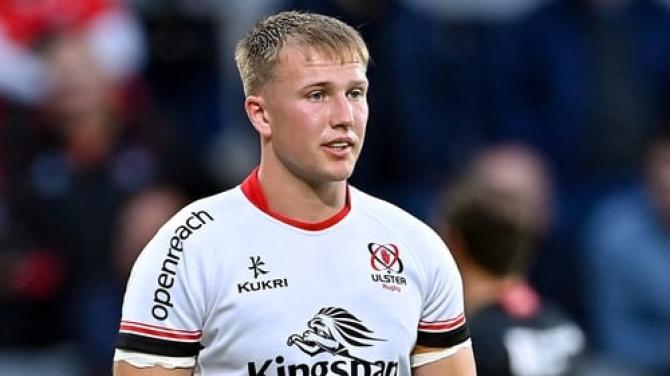 Stewart Moore moves to midfield from full-back for Saturday's game against Leinster.

The Ulster coaching team has selected their match-day squad to host Leinster at Kingspan Stadium on Saturday (7.35pm kick-off).

A limited number of tickets remain available for this top-of-the-table URC clash. Click here to purchase yours before they’re gone!

Stuart McCloskey will make his 150th appearance for the province and will start in midfield with Stewart Moore who makes a positional switch from full-back last week in the victory over Cardiff Rugby.

Mike Lowry and Robert Baloucoune are released from international duties to start at full-back and right-wing respectively, and Craig Gilroy comes in to start on the left. Last Friday’s half-back pairing of Billy Burns and Nathan Doak has been retained.

Andrew Warwick is named at loosehead, with John Andrew starting at hooker and Marty Moore packing down at tighthead. Alan O’Connor is named in the second row and will skipper the side. He will partner Sam Carter who comes in to start.

Marcus Rea makes a switch to blindside flanker, with Nick Timoney returning from Ireland camp to be selected at openside. Duane Vermeulen comes in to complete the forwards at Number Eight.

Jordi Murphy could make his 50th Ulster appearance if called upon from the bench. Murphy is joined by Tom Stewart, Eric O’Sullivan, Gareth Milasinovich and Mick Kearney in the forward replacements. John Cooney, Ian Madigan and Ben Moxham provide the back line cover.