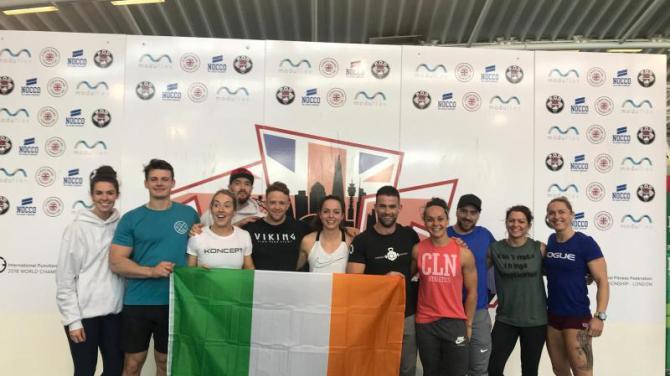 HARD work, willingness, focus and determination are the key factors in the life of fitness fanatic Michael Walsh, who competed in an International Fitness Championships earlier this month.

From October 5 to 7, Limavady man Michael competed in the International Functional Fitness World Championships in London, finishing an admirable 26th.

One of only two to represent Ireland in the individual events, Michael tested his endurance against some of the best athletes in the world.

Michael said: “It was a very surreal weekend indeed for me. Sharing the competition floor with competitors I watched on YouTube back at the start like we all do when we start Crossfit.

“Crossfit just takes over. I ask myself this on a daily basis “how hard can I actually push myself?”

“I don’t know the answer to this yet but I do know we can all go a little harder than we think.”

CrossFit is a fitness regime created by Greg Glassman in 2000.

Michael explains: “I started CrossFit in August 2014. I have absolutely loved the journey. I started off like everyone else does struggling with new skills and determined to master as many as I could.

“I’m still trying that’s why I love the sport of CrossFit.

“I played football all through my life and I think that’s where I get my willingness to work hard.

“I believe that the one thing in everything we do that should be a given is graft (hard work).

“Life is tough but we should know this so work hard to make the tough times easier.

“I have a wife and three amazing children the main reason I push so hard everyday to show them that no matter what it is if you work hard enough it’s possible to achieve your dreams.”

Pushing himself to succeed has been one of Michaels key goals in life, and holding his own in an International competition fills him with pride.

Michael continued: “I finished 26th, middle of the pack, it doesn’t sound like much but I was honestly so pleased with myself.

“Coming up against things I’ve never faced. Handstand walking ramps, heavy skipping ropes, Trueform running machines and not to mention the best athletes in the world.

“It was such a great experience and I plan to go again to represent Ireland next year in Sweden.

“I walked away from the weekend holding my own and doing so as more than likely the oldest male in the field.

“It has made me so hungry for more. I have goals set and every day I push as hard as I can just to simply tick off those goals.

“Watching people accomplish little goals through CrossFit, be it from a physical or mental aspect is truly breath taking.

“I love what I do and without everyone around me none of the things I do would be possible.”