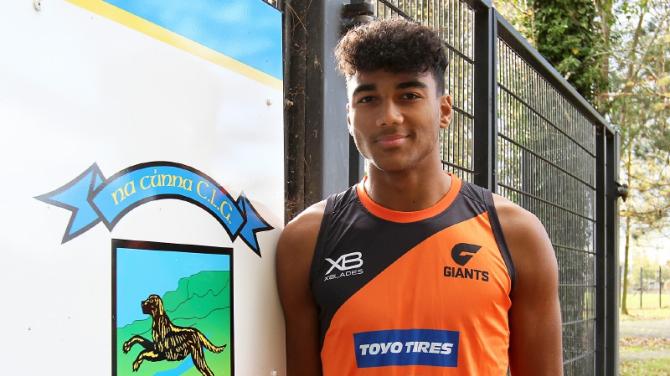 A FOOTBALL star in the making from Limavady is jetting off down under to play in the Australian Football League (AFL) after signing with the Great Western Sydney Giants.

Eighteen-year-old Wolfhounds and Derry GAA star Callum Brown was identified by the Giants’ Irish scouting program in July 2017 and undertook a 12-month trial process with the club, resulting in a two year contract offer.

Former Termoncanice Primary School pupil Callum flew to Australia in August to spend two weeks training with the Giants under the eye of coach Leon Cameron.

Brown, who was previously on the books of Linfield FC and was also touted for a move to Coleraine FC, will move to Australia next month to begin training with the first-to-fourth year players when they return to the club on November 19.

“He’s a powerful athlete, great speed and his skill in the Gaelic game is outstanding.

“For the short period of time he was out here during our season this year you could clearly see he could pick up the use of the Australian Rules football.”

McCartney said: “Callum really impressed when he spent time at the club earlier this year.

“He’s an incredibly athletic and skilful player and showed an ability to pick up the nuances of AFL footy during some intensive training sessions.

“We know it takes some time to adapt to our game and we won’t put any pressure on him but as an 18-year-old, he’s a really exciting prospect.”

Wolfhound Callum was an integral part of the Derry GAA team that reached the All Ireland Final in 2017 where they were beaten by an inspired Kerry.

Callum and his family moved to Limavady from England when he was four and the keen footballer started playing Gaelic for The Wolfhounds at the age of five.

At St Mary’s High School young Callum won many GAA awards including three Ulster Championships and an All Star Schools and College Award.

Callum said: “I have Chrissy McKaigue to thank for all I achieved in schools football, because of his great coaching and support.”

The athletic Limavady man will be setting off for Australia in the middle of November on his own, but he won’t be alone for long as his family plan to make the trip “down under” soon.

Excited Callum won’t have time to get too home sick.

He explains: “Pre-season training will start in November so it will be straight into it when I arrive, which I’m really looking forward to.

“Their season starts in March so there will be lots of training before then; it’s pretty much like here at home with the County.

“I enjoyed the training I did when I was out in August and did take to it and caught on to their technique quite quickly so I should get adapt to it quickly.”

It has been a busy year for the 18 year-old for both club and county, but Callum has some unfinished business before he leaves for Oz, the small matter of the Ulster Championship with his beloved Wolfhounds.

Callum explained how his dream move to Oz came about.

He said: “I was contacted by Nick Walsh (Giants’ defensive coach) back in November 2017 wanting to meet up.

“He had been watching me playing with the Derry county in the all Ireland and Ulster Championship and the rest is history.

“It’s been a long process with a lot of meetings, trials and coaching but it’s definitely been worth it.

“The decision to go, of course, hasn’t been as straight forward, I had a lot to do but I know this is an amazing opportunity and a great future for me and would never turn anything like this down.

“I plan to work very hard in Australia and learn as much as possible and hope I have a great career.”

Leaving behind family and friends in Limavady will be hard, and Callum knows he will have his family, friends and his club cheering him on as he becomes a ‘Giant’ in Australia.

He said: “I’m going to miss my family, all my close friends, club, county, the sleep-ins and of course my girlfriend.

“Of course my family have always been there for me, my close friend and their families and all my coaches (school, club and county) who have put up with me all these years and saw the potential in me.

“I know I can’t give all the names but want to thank them all very much. I want to be there with my Wolfhounds boys finishing off the Ulster Championship holding that cup!”