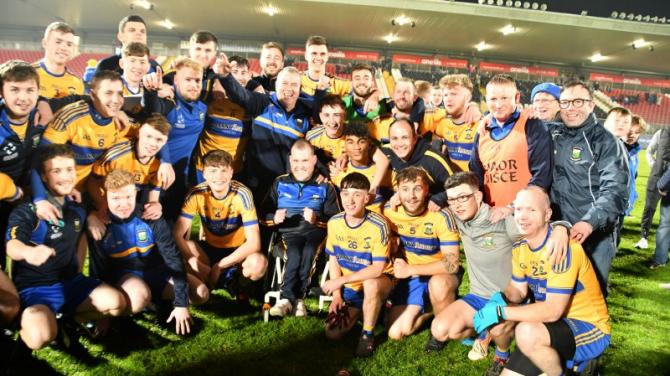 THE Wolfhounds kept the good wine until the last and it came in a small bottle named Brandon O’Brien.

They had come from behind to take a one point lead.

Then in the 60th minute Callum Brown who had been quiet otherwise burst through the Aghadrumsee defence and set up a brilliant move which finished with Ruairi Hassan sending pocket rocket Brandon O’Brien through for a classy low finish to the net and Limavady were in the Ulster final which is only the third time that a Derry club has reached that stage.

O’Brien wearing the number 26 jersey came off the bench for Ruairi O’Kane mid way through the second half and did as he had in the previous round against Teconnaught.

It was his late goal in that game that provided the insurance for the Wolfhounds 2-9 to 0-11 victory.

Aghadrumsee who had shocked Armagh champions Keady in the quarter final proved to be strong opposition.

They had a very experienced team led by former Fermanagh ace Eddie Courtney who picked off several excellent scores and also missed with four long range efforts in the second half.

In the end when the crunch came Limavady’s younger side had more in their legs and when they got fluidity into their play the Fermanagh champions had no answer.

For much of the game the losers had a grip at midfeld where full forward Darren Kearns who was later sent of had moved to.

He teamed up with Shane McManus and Fergal Sherry to form a trio of big men in the engine room.

When Limavady brought on their tall Jack Deery at half time he helped to break their dominance.

Eddie Courtney moved to wing forward and for a time was a huge threat to the Limavady defence but when the Wolfhounds put on the late pressure he was forced back into a defensive role.

When the Roesiders got their running game going in the closing stages Aghadrumsee had simply no answer.

Prior to that some of the Limavady play was patchy and the wides kept mounting up.

They shot six in the first half as opposed to the opposition who had only one and that came in the 28th minute.

The Wolfhounds as they did against Teconnaught made it a dozen wides double that of Aghadrumsee.

Even when things were not going to play Limavady had players who performed beyond the call of duty. Jamie McLaughlin was excellent at corner back all through cutting out Ahgadrumsee attacks and setting his own team in motion. Manus Quigley was outstanding in the second half when the opposition began to send in high balls. Conor Boyd was his usual sterling self at centre half.

It was the captain who drove forward in the 57th minute to level the game and with the Fermanagh side struggling against the Wolfhounds pace there was only going to be one winner.

Richard King started slowly but once into the game and hit some terrific scores from both play and frees.

Limavady now play Aodh Rua of Donegal in the final the weekend of November 17/18.

The Killygordon team made a stunning comeback in the game prior to Limavady v Aghadrumsee at Healy Park Omagh.

The Donegal team was trailing by 0-11 to 1-4 against competition favourites Emyvale from Monaghan when Calvin Doherty launched a one man comeback scoring 1-5 in the process to win by 1-13 to 0-12 the exact same score in total as in the Limavady game and both were exciting and good quality affairs.

In just over ten seconds Ruairi Hassan swept over a brilliant opening point for the Wolfhounds. Several other promising attacks failed to materialise as opposing full back Noel Beggan lived in Cormac Quigley’s shadow for the first ten minutes.

In their first real attack Eddie Courthey levelled for the Fermanagh side and it got even better for them when Oran Hartin the Limavady keeper over committed himself and Dale Crudden punched Fergal Sherry’s long ball into the net.

Oisin Hassan with another superb effort reduced the margin briefly but after thirteen minutes Shane McManus punched over to keep a goal between the teams.

A brilliant score from Courtney made it a four point game.

Then an Oisin Hassan free and a super long range effort from Richard King put Limavady back in the game. Cormac Quigley was beginning to motor and he took a Richard King pass to cut the Aghadrumsee lead to a point.

The Fermanagh men then hit their best spell of the game with points from Darren Kearns, Stephen Flynn (free) and Dale Crudden from a tight angle to go into a 1-6 to 0-5 lead. Aughandrumsse then lost Flynn to a black card.

It was Limavady who finished the half best with excellent scores from Richard King and Cormac Quigley but they still trailed by 1-6 to 0-7 at half time.

Richard King from a free cut the lead to a point and Cormac Quigley want close with a monster free.

A brace of scores from Courtney opened up a three point gap and when Thomas O’Hara put the Erne men into a 1-9 to 0-8 lead at the three quarter stage the Wolfhounds looked to be in trouble.

Their battling spirit saw Eugene O’Kane point from a tight angle and the gap closed further with a converted Richard King ’45.

Aghadrumsee were showing signs of fatigue as sub Aidan Bannon got a black card. Limavady were finding it hard to get frees at this stage and what looked a free for them was deemed to be a ‘hop ball’.

The ball broke kindly to Ruauri Hassan and he left just a point between the teams.

It was all Limavady as captain Boyd drove through the middle to level the game in the 57th minute.

Richard King followed with another for a 0-13 to 0-12 lead and sub Brandon O’Brien raised the roof of the Healy Park stand with they ‘insurance’ goal to put Limavady into the Ulster final and continue a 25 match unbeaten run.

In the frantic final stages Limavady’s Eugene O’Kane and Aghadrumsee’s Thomas O’Hara were both black carded.

Turn to page 57 for an interview with manager Dominic Woods.