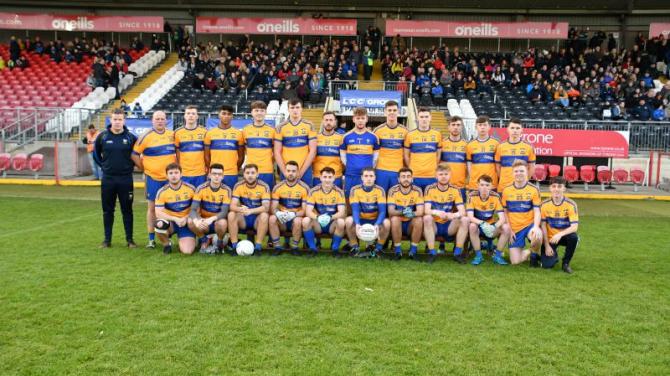 LIMAVADY won the toss for the choice of venue, now they are determined to be the first Derry team to win the Ulster junior football championship.

They came close in 2003 losing to Monaghan Harps after a replay.

Ballerin, Lissan and Faughanvale have also fallen at the last hurdle in this championship which came into being in 2001.

Limavady founder member Sean Bradley the current club president and first chairman looks back on the ups and downs of the club he helped to set up in 1980.

There had been GAA activity in the town going back to the 1890’s but until the Wolfhounds came into being the action was sporadic and petered out in the mid forties.

“It is great to be back in the Ulster final, for us this is unfinished business and while it may be a nervous time for our young team there is a steely determination to bring the cup to Derry for the first time.”

“Don’t forget this group of players know what it is like to lose finals.

“We had been knocking on the door for the previous two years and now it has opened for us.

“We have a shrewd management team who have been able to get the best out of the players.

“Neil McCloy is a brilliant trainer while manager Dominic Woods, his special advisor Noel McFeely and the other back room boys have really gelled into an ideal managerial combination.

Why Has The Success Come This Year?

“It goes back a number of years, the coaches in the schools with special mention of Chrisy McKaigue, our own under age managers and coaches and players who are now reaching the height of their powers.

“We have people who have passed away and who kept the club going in tough times.

“They would have been proud of the position the Wolfhounds are in today.

“Our neighbouring clubs Glack, Drumsurn and Magilligan have also benefited from Chrissy’s work in St Mary’s and they are in a good place as well.

“Unlike other sports it takes years of toil and patience to build a successful Gaelic football team.

“The final will be tough, prior to our game against Aghadrumsee we saw Aodh Rua beat the championship favourites Emyvale with a great comeback. Players like Calvin Bradley, Gerard Melaugh and Stephen McMenamin have a lot going for them and it will be great if we can get over the line”

“ It has been fifteen years of good and bad times wince our last final appearance so we have to make the best of it.

If all goes to plan it will be a huge boost for the GAA in this area” and it will inspire more young players to wear the Wolfhounds colours.

Attacking Pace Can Be The Key For Wolfhounds

While not playing particularly well Limavady are through to the final. Fortunately for them their best spells against Teconaught and Aghadrumsee came in the closing stages when their sheer pace left the opposition virtually out on their feet.

Then, of course they unleashed their secret weapon in the shape of Brandon O’Brien and he blasted in spectacular late goals in each game with Callum Brown’s powerful runs opening up the opposing defences.

Aodh Rua are a seasoned lot and will provide Dominic Woods young crew with their toughest test to date.

They looked down and out against Emyvale in the semi final until they hit a brilliant spell in the final quarter scoring nine of the last ten points to win by 1-13 to 1-9.

Emyvale looked to have one foot on the final but they just seem to implode and the Killygordon men ran through them at will with Calvin Doherty adding five points from play to his first half goal.

In the quarter final they had beaten Antrim champions Glenravel by 3-8 to 0-8 on the day when Limavady beat Teconnaught by 2-9 to 0-11. They have a very solid outfit particularly going forward. However it was noted that they creaked defensively at times.

Remarkably both he and Aodh Rua’s top scorer Calvin Doherty were both sent off near the end on black card offences.

They are strongly built and fast, this season attacking ace Cormac Quigley has been joined on the team by his younger brother Manus and both are key cogs on this ever improving team.

When Aghadrumsee looked like ending the Wolfhound’s Ulster campaign it was full back Manus who stepped into the breach with his high fielding and accurate passing that went a long way towards turning the game around.

With the pace of the modern game full back is s difficult position to play and Manus is quickly emerging as a player of great promise.

Shane Gallagher is likely to be the player he is tasked with and it is a battle he can win.

The quick thinking and quick footed Jamie McLaughlin has been one of the unsung heroes of this season.

His reading of the game and ability to carry the ball out of defence at pace has been instrumental in setting up fruitful attacks.

One pre final boost for the team has been the return to the team after injury by the 6’ 4” midfielder Jack Deery.

He had been out for five weeks with a foot injury but came on at half time against Aghadrumsee and made quite an impact.

He could team up with the powerful Callum Brown and this will allow the industrious Sheagh McLaughlin to move to the attack.

Over the last three years Limavady Wolfhounds have built a strong squad.

Having subs who can make an impact is a key element of junior football.

They have the experienced duo of Eoghan Rogers and Conor Forrest along with Eoghan Kelly, Mark McGroarty and of course pocket rocket Brandon O’Brien who can be game changers.

They need to get off to a more positive start than in the previous two games and be wary of the comeback ability of the Donegal men who in the past produced an All Ireland winner in the legendary Donal Reid with Donegal in 1992.

Aodh Rua also have a big squad of mainly experienced players and they will go in as strong favourites but Limavady have the younger team and can make their own little bit of history.

is confident that an Ulster title can make its way to the Roe Valley. “We have had the bitter experience of losing finals, when it hurts it can propel you to be on the winning side”

Former Drumsurn forward Dominic Woods now the proud Wolfhounds manager said “Limavady were in junior football at the start of the year, now we are promoted to Division 1B and are in an Ulster final and determined to win it”

For the record Limavady have played 26 games this year and have won them all most by a wide margin.