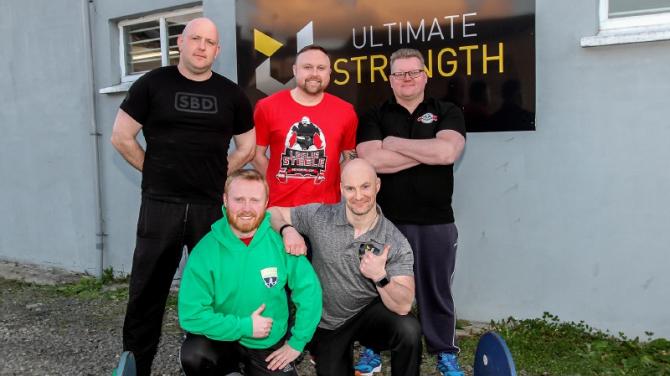 FIVE fit Limavady men have been selected to represent the Northern Ireland Powerlifting Federation at the Commonwealth Championships in Newfoundland Canada for a week long competition.

Eugene Currie, Alastair McClelland, James McILwaine, Paul Ferris and Ricky Morrison will compete in the Disciplines of Squat, Bench and Deadlift from September 14 to the September 22.

To have been selected results have been taken from the previous year of competitions with the best been offered the position.

The sport of powerlifting has seen tremendous growth over the last few years and is an all inclusive sport for male and female young and old, ages range from 14 years old to over 59.

“It is a huge honour to be selected to represent your country in the sport that you love and for a small town like Limavady to have five people selected is something quite amazing.”

Eugene and Alastair also formerly used to train with Ricky and are current NIPF referees.

Ricky added: “All of us are great friends and when asked what powerlifting means they all agree it feels like a family where everyone wants the best for each other and to see each other improve and succeed even at competitions.

“There really is something remarkable about the team spirit and this sense of community can and always benefits those involved.

It is goal setting at its finest and everyone going (some 42 around the country) all hope to achieve personal bests in their respective weights classes.

The ‘Fab Five’ are up against the best lifters in the world but they all relish the opportunity to prove themselves on the platform.