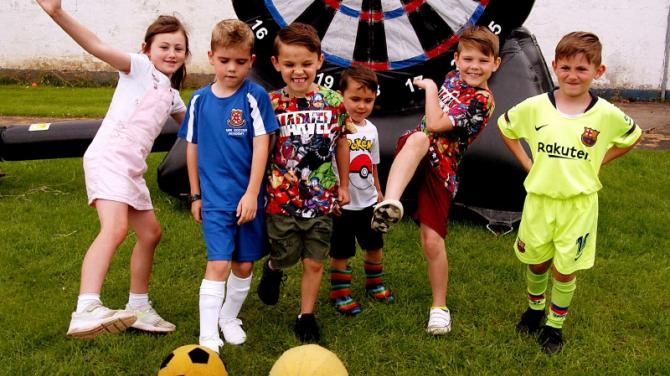 THE new manager of Limavady United has issued a personal thanks to everyone in the community for the support the club has recieved in its inclusive and ambitious plans.

Mark Clyde told the Northern Constitution that club staff and players have all noticed a different buzz and feeling around The Showgrounds this summer.

Speaking after a community fun day held at the Rathmore Road club, Mark said: “A lot of work is starting to happen around the club with painting and general maintenance happening on a weekly basis now.

“It's important that everyone feels welcome to our club and hopefully the town can start and see what we are trying to do.”

“Pre-season is going well, the team are now three weeks in and starting to make progress.

“We are still a couple of weeks away from being fully fit but this will come with games and training over the next number of weeks.

“Our two games so far have shown alot of promise, Coleraine was a hard test but the lads did really well considering it was our first game together, going down 2-0 to a very experienced team.

“Saturday's game against Maiden City was another decent performance winning 1-0.

“I think the first 45 mins showed that after just one session working on how we want to play in possession shows that the lads really are moving in the right direction and have a great desire to be successful the year.

“The second 45 wasn't as good but we can built from this.”

Mark was keen to establish direct links between the senior squad and the youth set up.

Mark added: “The formal link between Limavady Utd and Limavady Youths is now in place and the new sign will be visible this week to everyone going past that the showgrounds is now a home for football for all youth and senior teams.

“We also have got new sponsors on in place and made a partnership with a kit supplier that will hopefully grow and see a uniform throughout the entire senior and youth teams as well.”