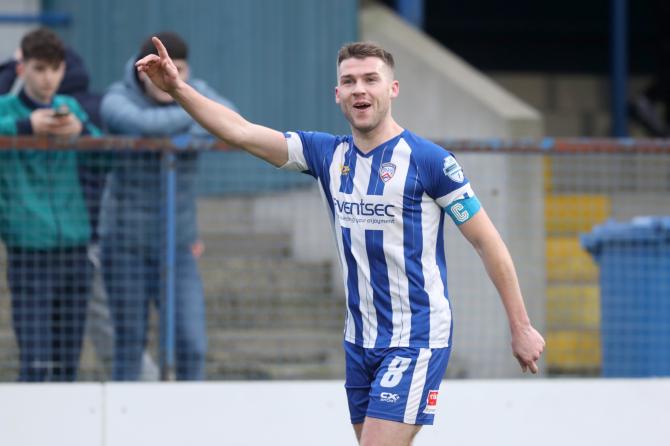 THE new season can’t come quick enough for experienced Coleraine midfielder Stephen Lowry, who admits he and his colleagues have a lot of ‘making up to do.’
His comments come on the eve of Saturday’s opening Danske Bank Premiership game, at home to Paddy McLaughlin’s Cliftonville side, and in the wake of a disappointing 2018-19 campaign.
The Bannsiders finished sixth in the league and narrowly missed out on European qualification via the Europa League play-offs and again in the Tennent’s Irish Cup semi-final.
Ironically, it was the Reds who extinguished Coleraine’s hopes in the league play-off - the club’s last competitive outing - and they will provide stern opposition again this weekend.
But Limavady man Lowry prefers to concentrate on his own - and the team’s - preparations, which he admits have been going well in pre-season.
“Pre-season games are always difficult,” he admitted.
“For me, personally, it’s about getting fit following a persistent back injury which troubled me for a lot of last season.
“I found out that I had a tear in my hip but I played through it with the help of injections. I got some rest over the summer and feel a lot better now.
“I’ve played the last couple of games and can’t wait for Saturday.
“We’re all itching to go. It’s a clean slate and we’ve a lot of making up to do,” he added.
The close season saw the departure of Rodney McAree and the much heralded return of previous manager Oran Kearney and the hope is that the Ballymoney man can help resurrect the club’s fortunes.
“Oran hasn’t changed that much. He was a bit quieter than normal at the start but I think he’s enjoying it again now that he’s settled back into it,” continued Stephen.
“He knows what he wants as a manager and the players know that. Most of us are familiar with him from before and we know how he likes to play.
“It’s up to us to perform and to make sure we get picked in the team.”
Oran Kearney inherited a sizeable squad on his return to the Showgrounds which may be added to with the imminent arrival of former Dergview and Magherafelt Sky Blues striker Emmet McGuckin.
The former Derry GAA star is expected to join the club this week and will bolster the club’s attacking options.
However, it is likely that one or two players may be deemed surplus to requirements, given that the manager tends to prefer working with a small, tight-knit squad of players.
But whatever happens on the personnel front, those that remain will be determined to prove that last season was a blip and that they can again compete with the league’s leading teams.
“There’s no better feeling, in life and in football, than proving people wrong and that’s what we’ll be aiming to do this season,” continued Stephen.
“It might actually suit us that people are writing us off after last year. We haven’t spoken about it as a group but there’s no doubt we’re all disappointed with how last season went.
“Players’ pride is at stake and we’ve got to prove to ourselves and to others that we can compete with the best teams in this league. We’ve got to look at ourselves first and foremost.
“We also want to repay the fans for the support they have shown. There’s no hiding place this year and we’re really looking forward to getting started.”