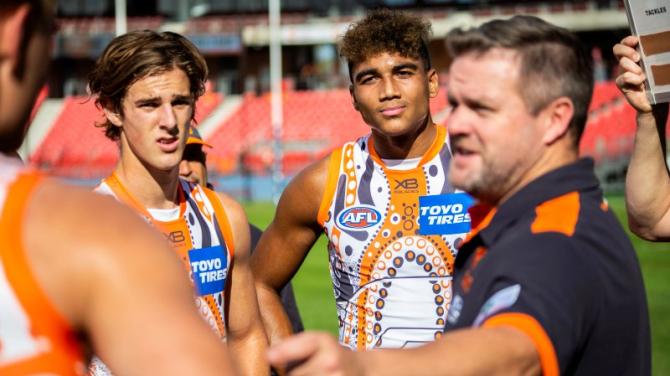 LIMAVADY lad Callum Brown has drawn praise from fans and coaches of his new Australian Rules Football team at Great Western Sydney Giants after scoring a goal in a recent club game.

Eighteen year-old Brown began his transition from Gaelic football to Aussie rules in late 2018 when the Giants signed the young prospect on a rookie contract off the back of countless notable displays for both club and county.

Callum collected three marks and scored a goal in the game against Sydney Swans, which is no small feat particularly for a player who this time last year had never played a game of Aussie rules football.

Australian coaches often are unsure of what to expect with Irish recruits but are mostly understanding of the difficulties the switch can have for many players dealing with new rules, a differently shaped ball, the mark and a more robust tackle.

Speaking with the GWS Giants website, team coach Adam Schneider said: “It is all about having some fun, and getting Callum into it.

“I said to him, there's no pressure here at all. Just go and play, get a handball, get a kick, make a tackle and enjoy it.”

Schneider continued “He's got so much power and leg speed. We want him to use it, and to jump and fly for the footy and take some contested marks too.”

Callum said “I don't want to waste my time here. That's my mindset at the moment; I want to be as good as I can with everything and make that good impression.

“I have improved a lot with kicking, handballs and the revision, but I want to play smarter, be good for my teammates and make sure all my communication on the field is good.”

This is not the first time that Callum has crossed sporting codes. He is also an accomplished soccer player having played for Linfield Swifts alongside his duties with Na Cúnna and Derry GAA U20 and Minor.

It may be early days in his Australian rules career but there is plenty to pleased with for the young Limavady man south of the equator.

While Limavady and Derry may have lost a great player, GWS Giants and the AFL gained a real star.

Brown is one of three county Derry footballers who are currently plying their trade down under with Glen Maghera's Conor Glass currently signed with Hawthorn and Swatragh's Anton Tohill playing with Collingwood.