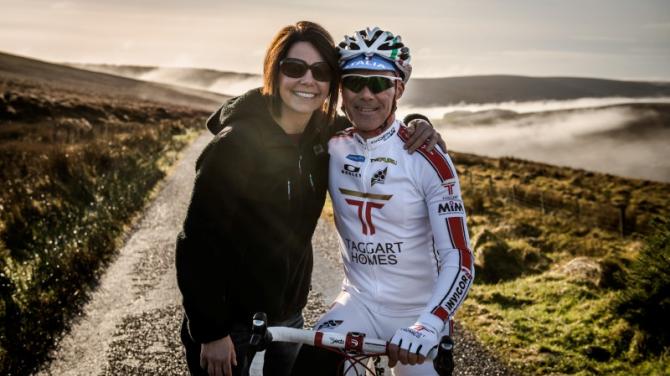 AN legendary Limavady man has just become a quadruple World Record holder after cycling the width of the island of Ireland.

60 year-old world endurance cyclist, Joe Barr, has just achieved his fourth cycling world record by cycling from the most Easterly point to the most Westerly point in Ireland, Wicklow Head Lighthouse to Slea Head, Co. Kerry.

Joe Barr now holds World Records for the fastest time cycling in Ireland from East – West, North-South, South-North, North - South - North and he also holds the Irish record in the Race Around Ireland, a 1500-mile non-stop race that circumnavigates the Island

Inducted into the Race Around Ireland Hall of Fame just last weekend, Joe’s cycling successes have continued to multiply since the start of his endurance cycling career in 2009.

Spurred on by his young son overcoming a cancer diagnosis, Joe took home the top spot in his first endurance race - Race Around Ireland in 2009.

In ten years, Joe has accumulated more than 200,000 miles in training and racing and Team Joe Barr is now considered one of the world’s most elite endurance cycling teams.

Originally from Donegal and now living in Limavady, Joe is one of Ireland’s most successful athletes, with a career that spans over 45 years, and having won over 500 races throughout his amateur and professional career.

“Despite turning 60 my performances are getting stronger and stronger.

“Age really is a red herring.

“One of the reasons my performances are still improving is the unwavering support of my team.

“To go the distance, you have to be surrounded by the right people.

“Setting a World Record for East to West cycling in Ireland today completes all of the World Records for major Irish endurance distances, and it’s a real achievement for the team and I to hold all of the titles at the one time.

“This comes on the back of RAAM - Race Across America – which took place in June, during which I turned 60!

“It’s an epic 3,000 miles challenge across America that that’s been completed by fewer people that have climbed Mount Everest.

“This year, I won in my age group, marking another important milestone for the team.”

Having completed his final race of 2019 in August, Joe is currently in contention for a title in the 2019 World Cup, which is awarded by the World Ultra-Cycling Association due to be announced later this year.

For more information on Joe, his career or to get in touch with Team Joe Barr, see www.teamjoebarr.com or follow the team on @TeamJoeBarr on Facebook.