Roesiders blast three past Armagh to pick up first points 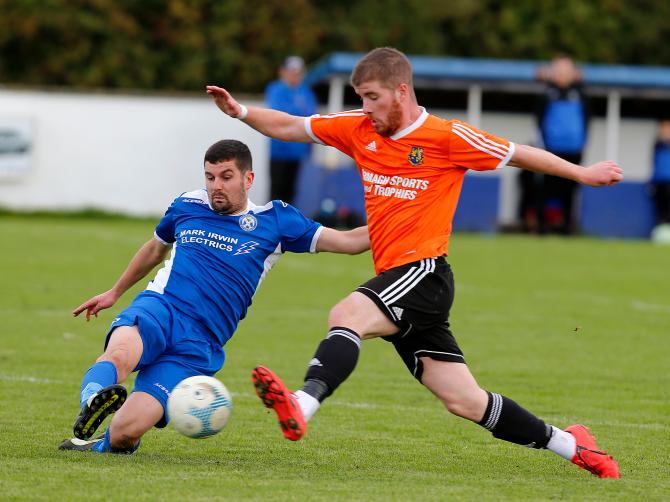 LIMAVADY United put in a dominant performance at The Showgrounds last Saturday when they trounced visitors Armagh City 3-0 in a strong display.
This impressive result means that Limavady pick up their first league points of the season which will bring a sense of relief to both players and management and will give the squad new confidence going forward.
Chances were few and far between in the opening stages of the game with both sides finding it difficult to get shots on target. LUFC were holding onto the ball better and this was reflected in the possession statistics. This allowed Limavady to have more attacking opportunities which were largely well marshalled by the Armagh defence in the first 30 minutes.
United's best opportunity of the game came around the 41 minute mark when Dean Brown was slipped the ball inside the box but a miss-kick meant that the shot was powerless and so was easily gathered by the Armagh goalkeeper.
Four minutes later Brown was able to make amends for his earlier missed opportunity when he was able to round the keeper and rattle the net after a scrappy piece of play in the penalty area which put Limavady 1-0 up just before half time. The goal proved to be the last action of the first half giving the home side the psychological advantage going into the break.
The first minutes of the second half saw further attacking play for the roesiders with some nice passing between Daibhead McIvor and Dean Brown setting up two dangerous crosses which zoomed across the Armagh 6-yard-box.
In the 49th minute a mistake by Armagh goalkeeper, Daniel Devine led to him pulling Dean Brown to the ground inside the penalty box which gave the referee little choice but to award a penalty kick to the hosts. Sean McCarron stepped up to the penalty spot and duly obliged firing into the left corner to make the score 2-0.
Armagh United's best chance came in the 65th minute when Neil Kerr had a clear path to goal but fluffed the opportunity blazing the ball over the crossbar.
Gary McFadden, who had been on set piece duty all day, almost saw the day's third goal when his free kick was able to test the Armagh goal with a placed effort in the 67th minute.
In the 79th minute substitute, Oisin Hassan was able to get on the score-sheet and secure the win when he slotted home after a quick rebound from a goalkeeper parry.
Armagh had a goal ruled out after an offside in the closing period before missing one last headed opportunity from a corner to end the day's proceedings and hand all three points to Limavady United.
Limavady United team manager, Mark Clyde spoke after the game and said: “It feels good to finally get up and running and be able to give a decent performance in a league match.”
“The performance was a lot better and certain aspects of our game are now improving. Better shape and positioning when defending and restricting space for the opposition. We created a lot more chances and scoring three goals is a direct result of that.”
Mark was also keen to highlight the youth of the Limavady squad which gives much optimism for not only for the current season but for future seasons also.
“We are getting better all the time and the team is young and hungry with great potential. Our under 18s and under 20s have got off to great starts in their leagues also. The future is looking good which means we could be using some of the youth players in the senior squad soon.”
“The club is in a good position right now in terms of development of players.”
A singing section has sprung up at Limavady United home games which has created a lively atmosphere in the stand. The drum beats and animated singing are a loud reminder of the support for this current generation of footballers at The Showgrounds.
Clyde said: “The support we've been getting at home games is great to see and appreciated by all the staff and players. Long may it continue.”