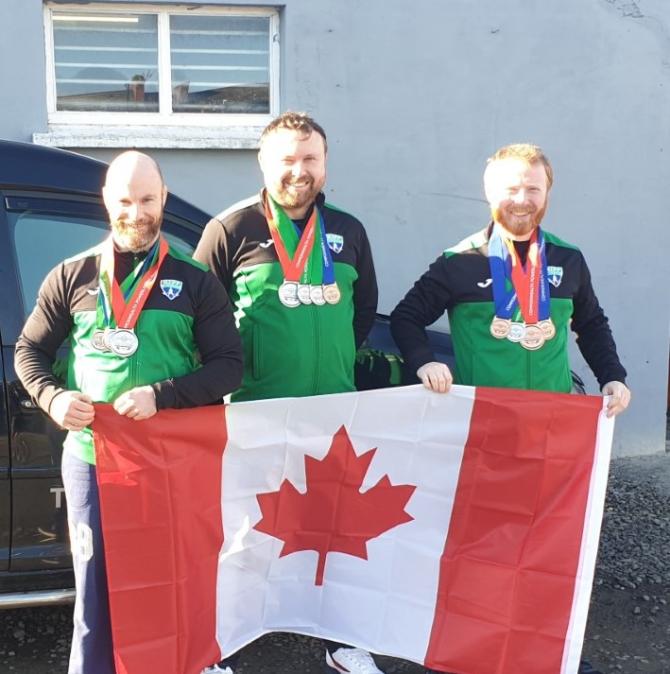 IN September of this year five Limavady men, representing Northern Ireland, made a hopeful journey across the Atlantic to the Canadian provence of Newfoundland in search of powerlifting success.
Paul Ferris, James McIlwaine and Ricky Morrison, representing Ultimate Strength gym in Limavady, stood out in the week long 2019 Commonwealth Powerlifting Games, competing among athletes from around the globe.
The three super strength enthusiasts got just rewards for their hard work and dedication over the years with medal finishes in the Canadian competition.
Forty competitors from Northern Ireland were represented but it was three men from the Roe Valley who with impressive podium position finishes for their individual weight divisions.
Competitors were judged on their lifting prowess in the squatting, deadlifting and benching abilities.
Paul Ferris squatted 207.5kg for silver, benched 120kg(PB) for bronze and deadlifted 252.5kg (PB) for silver to win a silver medal overall in the master 105kg weight class with a total of 580kg lifted.
Teammates, James McIlwaine and Ricky Morrison squared off against each other in the 74kg weight class and the finish between the two was close
James McIlwaine squatted 207.5kg for silver, benched 107.5kg for bronze and deadlifted 205kg (PB) for bronze earning a Bronze medal overall in the open 74kg weight class with a total of 520kg lifted.
Ricky Morrison squatted 190kg for bronze, benched 125kg for silver and deadlifted 207.5kg (PB) for silver placing him with a Silver medal overall in the 74kg open weight class with a total of 522.5kg lifted
Ricky Morrison, coach and owner at Ultimate Strength gym said: “James pushed me to my very best in this competition and it came down to the last deadlift where I beat him by just 2.5kg. For me this was the highlight of the competition and shows what our sport is about, friendly rivalry but ultimately we want everyone to do their very best.”
Two other local men, Eugene Currie and Alastair McClelland also displayed commendable performances and deserve an honourable mention for their efforts in Canada.
Ricky commented further on the great position that powerlifting is in.
He said: “The sport of powerlifting is growing and is now an all inclusive sport for all ages and genders.
“With the rise of Paralympic powerlifting as well now there is opportunity for new groups of people to become involved in the sport.
“There has never been a better time for people to realise their own potential.
“Strength is a test of character, patience and perseverance.
“It helps to build a bond with fellow lifters and helps build better knowledge and support in the local community.
Ricky concluded: “The opportunities are there for those willing to work and I sincerely hope more people get involved in the sport and if anybody would like to test their strength/skill, improve technique and knowledge then further info can be found on Facebook or www.ultimate
strengthgym.com”