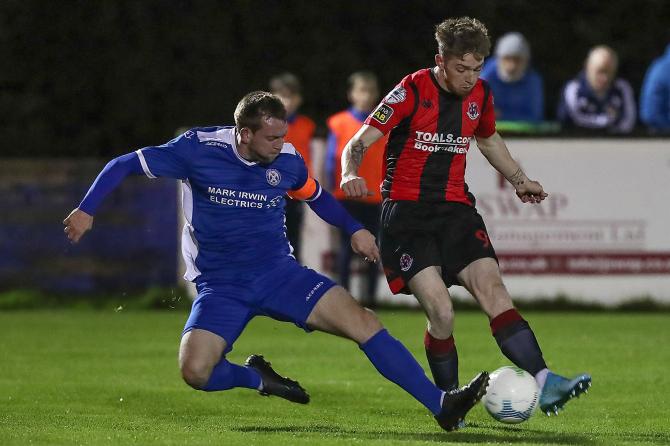 LIMAVADY United captain Hugh Carlin has challenged his team-mates to end a difficult 2019 by securing a spot in the fifth round of the Irish Cup.
The Roesiders play host to Bangor on Saturday, November 30, with the winners facing a possible lucrative fifth round tie against one of the Premiership big boys.
It is fair to say 2019 hasn’t been kind to United who suffered relegation from the Bluefin Sport Championship, with Sean Friars also departing the club to take up a coaching role at Institute.
United have since returned to the Premier Intermediate League and currently occupy 7th spot after five games.
The latest was a 2-2 draw against Banbridge Town two weeks ago as a late penalty from Sean McCarron salvaged a point for United.
Speaking on that fixture, Carlin believes that United will have to cut out conceding silly goals if they are to climb up the table.
“In reality, despite scoring a late penalty, I think it was two points dropped as we were at home,” he added.
“We conceded two sloppy goals on the day and it was a missed opportunity to close the gap on the teams above us.
“It’s important we turn draws into wins as the teams above us continue to win and don’t look like dropping points.”
Due to cup commitments and the withdrawal of Lurgan Celtic from the league, United have had a two week break between fixtures.
Despite this not being ideal, Carlin insists the club have experience of being in this position before and can’t use it as an excuse.
“It doesn’t help having two weeks off as we would like to get back out there after the draw against Banbridge Town,” he continued.
“It is annoying waiting for a game as we want to to be out there and crack on with the league, especially after a draw or a defeat.
“It’s a bit stop-start as you never get a run of league games before December but it’s nothing we haven’t seen before.
“We can’t use it an excuse as it’s the same for every team in the league and we have got out of this league a few times in recent years.
“There is a few points separating the top teams but you never really know where you’re at until January time when there is a sustained run of games, or games are called off and you have to play catch up.
“We aren’t concerned with our position at this current moment in time, but we realise we need to cut out conceding silly goals.”
Next up for the Roesiders is a clash against 1993 Irish Cup champions Bangor at The Showgrounds in a couple of weeks time.
Bangor are currently 4th in the Intermediate League and Carlin knows there is plenty at stake when the two sides lock horns.
“We haven’t played Bangor for a few years now,” he recalled.
“They have similar aspirations of going up, so it is a chance for us to get a look at them and vice-versa.
“If we can get through that round, then we will get ourselves of drawing one of the big hitters and that’s what you want.
“We let ourselves down in the Irish Cup last year and we certainly want to put that right this time around.
“It won’t be an easy game but one we are all looking forward to.”
With a busy schedule over the Christmas and New Year period - which includes an away fixture against Strabane Athletic in the NI Intermediate Cup - Carlin revealed that he will have to take his preparations seriously.
“This is the first year in quite a few seasons that we will have Boxing Day off due to not being in the Craig Memorial Cup final and our relegation,” the 29-year-old concluded.
“Boxing Day is a big day in the calendar but unfortunately we won’t have a game.
“Regardless of that, I will prepare myself like I always have, but also to enjoy that time of the year.
“It can be tough to be self-disciplined but you have to be at your best if you want to perform.”