Fine effort not enough for Roesiders 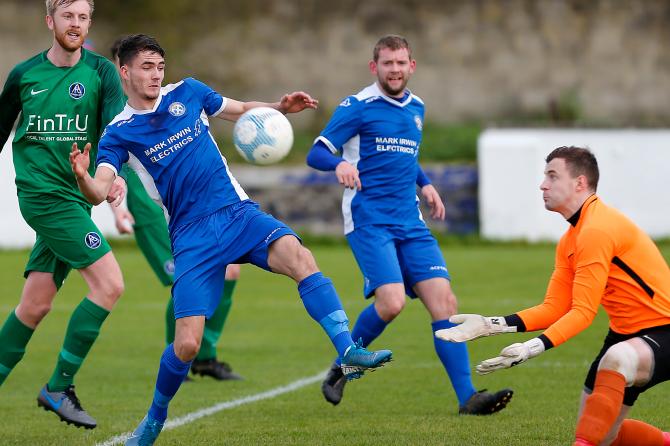 A GALLANT Limavady United effort fell short when the Roesiders visited New Grosvenor Road Stadium and came away having been narrowly defeated.
The home side broke the deadlock with a curled effort from a long range Kevin Braniff free-kick which gave ‘The Whites’ the advantage entering into half time.
Kevin Braniff was able to double his scoring total early in the second half after he received a perfectly weighted pass before being able to slot past Limavady United goalkeeper, Connor Brown to make the score 2-0.
Limavady were able to pull one back to make the score 2-1 in the 70th minute with a goal from Daibhibd McIvor.
Despite dominating large portions of the game ‘the Blues’ could not add any more goals and were set for defeat for a second week in a row.
Despite the disappointing defeat Limavady United team manager, Mark Clyde took many positives from the game against Distillery.
Mark said: “To be honest the team played really well. We’re still trying to understand why we didn’t win the game. We played great football at times but we just need to be more clinical in front of goal.”
“In my opinion we are now starting to see the signs of improvements we wanted from the lads and I am happy with the way things are going.
“We never said it was going to be an overnight fix but it’s definitely good to see the improvements coming.
“On Saturday we should have been three or four nil up before they scored an unstoppable free-kick. We then dominated for the second half only for them (Lisburn) to score against the run of play after we had switched off slightly.
“We eventually pulled one back and should’ve had more but just couldn’t finish all the great build-up play that we had been producing. ”
“If we continue to dominate games like this and just put our chances away we will certainly win more than we lose.”
Mark Clyde also touched upon the headache that can be induced with the fixture list problem where team rhythm can be affected due to sporadic gaps between league games.
Mark added: “Fixtures have been a problem for us all year in terms of not enough league games back to back but it is up to us as a team to be prepared for every game.”
Limavady United’s next league game will see them host Portstewart at The Showgrounds on December 21.