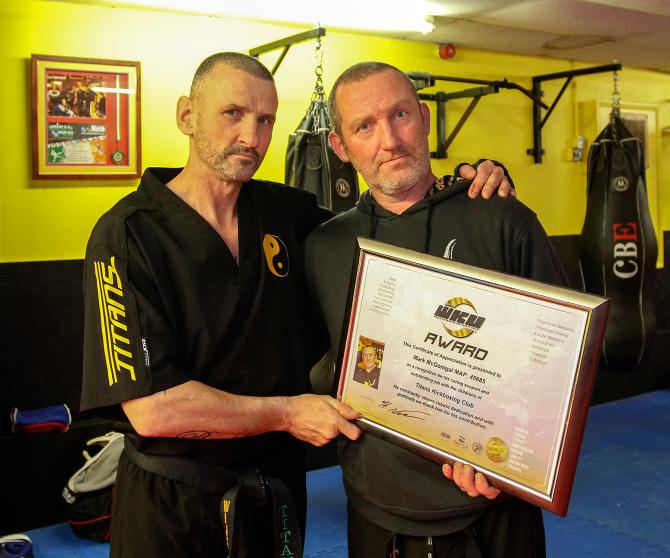 THE Limavady titans Kickboxing club rewarded their fighters, volunteer helpers, coaches and perhaps most importantly their supporting parents at their annual presentations this week.
2019 has been another outstanding year for Limavady's most successful sporting club, in terms of numbers collectively they achieved over 550 trophies and medals between them, a truly amazing number by anyone's standards. Club fighters travelled to and competed in 21 competitions, throughout the world, including the USA and Austria, and on each occasion returned as champions.
Hard work pays off and none more so in a sport which requires so many attributes, that is, apart from the obvious ones, fitness, concentration, and finely honed skills. Along the way no doubt there have been injuries, there have been disappointments, there have been tears and maybe even the odd tantrum, that is competitive sport, but when all the numbers are added up the Limavady Titans Kickboxing club as one unit can be truly proud of all their achievements and successes this year. In a sport which receives absolutely no funding whatsoever, everything these fighters from our area achieve, comes directly out of their own and their families pockets.
During his introduction to the awards ceremony this week, Chief Coach Willie Lowry made a special effort to recognise the support the club receives from everyone involved.
From a man recognised throughout the sport at every level for his dedication and commitment to kickboxing these words are not taken lightly. Virtually every night of the week, the club is open for the fighters to train and have their skills finely tuned by a true master of the sport who has time for everyone, and who dedicates everything to training the next world champions from the Limavady area.
By his own standards Willie himself has had an interesting year, suffering a major injury in the summer he bounced back within weeks to become a World Champion.
Again, and more recently he was recognised as an unsung hero in the 'Unsung SuperStar' at the third annual SuperValu SuperStar Awards for his dedication in running the club.
On a night when the club recognised its fighters of note was the recipient of the Kyle Ferguson Award, Caitlin Dunne.
Always an emotional moment for those of us lucky to have known Kyle, his memory lives on by the annual presentation of the award in his name. Caitlin was also invited to become one of the club’s trainers, along with David Monteith. The two young fighters join a group of coaches at the club giving something back to the club which they serve so well.
The final number to remember from the annual presentations evening is 2020!
Next year, the Limavady titans Club will celebrate their 20th year, (Platinum in terms of wedding anniversaries).
In just a small number of days the doors will again be open to every boy, girl, man and woman whether experienced or not, to start the hard work all once more to make next year another 'Golden' year for Limavady's most successful club.