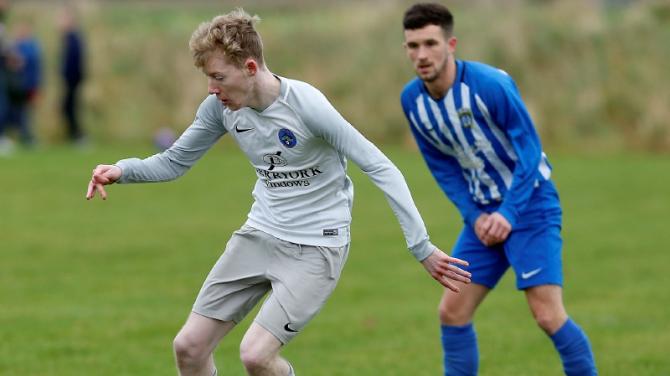 LIMAVADY United began 2020 with a 2-0 win over league rivals Tobermore after a lengthy Christmas break.

Supporters will no doubt be hoping that the win is a sign of things to come in the second half of the season.

The opening period of the game saw chances for both sides to open the scoring.

In the sixth minute Jack Devenney’s crossed ball into Daibhibd McIvor led to calls for a penalty after a suspected handball by Tobermore United’s Shane Mulgrew but there was to be no whistle blown on this occasion.

A minute later Tobermore got on the end of a botched Limavady clearance but fluffed the opportunity as the resulting shot was sent sailing wide.

In the 19th minute Tobermore had an audacious attempt to outfox Ray Kelly when Peter Duffin almost completed a chipped effort to break the deadlock but the shot was skewed off target and the sides remained level.

Tobermore were operating in midfield quite well as the half progressed with continuous, powerful runs from Gary Keane. These regular troubling runs resulted in several corners but did not end with any clear cut chances for The Reds.

Likewise, Limavady's Gary McFadden was the instigator of much of the home side's creativity in the middle of the park and was involved in good passing and made a number of positive runs.

In the 38th minute the deadlock was to be broken.

Ryan Dohery advanced on goal before passing the ball to the wing where Ryan Devine was in position to drill an awkward ball into the box where Tobermore captain, Kyle McVey was in the unfortunate spot to deflect the ball into his own net to give The Blues the lead.

The goal gave the Roesiders a new lease of confidence and they were now applying heavy pressure in search of a second goal before half-time.

Limavady's short spell of dominance paid dividends when on the stroke of half-time Gary McFadden gave Tobermore goalkeeper, Lukasz Bednarz zero chance of saving a wonder strike from well outside the box which went straight into the top corner.

The half-time whistle blew with the score at 2-0.

Early in the second half Dean Brown could've made it 3-0 for Limavady but just missed what was a great opportunity.

Tobermore's best chance of the game came in the 60th minute when Peter Duffin rattled the upright before the ball was cleared.

Tobermore appeared to be growing more comfortable on the ball in the second half and were putting in good effort to pull a goal back.

TUFC again missed a good opportunity in the 72nd minute to score when Gary Keane headed a whipped cross just past the Limavady posts.

There was one last opportunity for the south Derrymen in the 85th minute after a crossed free kick a strong header was again guided just wide of the target.

The full time score was to be 2-0 in favour of Limavady United. Tobermore United remain adrift at the bottom on the Intermediate division while the Roesiders sit in seventh position.

“It was an OK performance overall,” he said.

“I think we were sloppy in possession at times but given that it is the first time in a few weeks that we have played in a couple of weeks, so we can’t be too critical.

“In the first half I think we should've been three or four goal in the lead but we didn't convert.

“In the second half we decided not to chase the game so instead we wanted to keep it compact and see the game out which we did so that was pleasing.

“It's pleasing that we were able to keep a clean sheet because this is something that we have been working on.

“Bangor next week we will try to build on the last couple of games and see if we can get a decent run together in the month of January.

“We would like more of the same but again we know that if we can get the best from this bunch of players there is so much potential in the dressing room.”

There have been some movement in terms of players at The Showgrounds and Mark Clyde also spoke of the need for additional faces.

Mark said: “In terms of departures Sean McCarron has left to go to Dergview and Ryan Logue is about to leave to Portstewart.

“There is most likely to be 3- 4 coming in next week but also we have a few of the under 20 players who are very close to getting into the squad as well.

“We don't want anyone else to leave,” he added.

“We aren't just thinking about this season but on seasons to come.

“For a strong squad in the future we need a young team with hunger and desire to progress but with a few wise and experienced heads thrown in as well.”