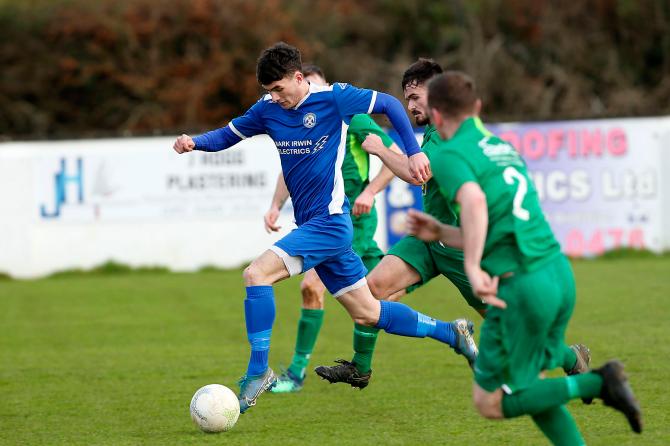 LIMAVADY United safely progressed in the McComb's Coach Travel Intermediate Cup after a hard-fought third-round victory over last season's cup winners, Crumlin Star at The Showgrounds.
Last weekend, the deadlock was broken in the 20th minute when Ryan Doherty was able to put the home side ahead from inside the box.
An equalizer came at the stroke of half-time for the North Belfast men when Tommy Lambe scored with a great strike from distance.
The second half proved to be a tetchy and niggly affair with play being disrupted several times.
Ryan Doherty, however, took full advantage of a foul in dangerous territory. Doherty managed to add a second to his goal tally when he scored from a placed free-kick to make the score 2-1 in the 70th minute.
Limavady United team manager, Mark Clyde spoke about the team's performance after the game.
“The team did well,” he said. “We were without a few men due to illness and our two new signings were cup-tied so it gave a chance to a few of the under 20s players who have been working hard over the last couple of months.”
“The game itself went well in the first half, we really should have been two or three up before the equalizer came just before the break.
“The second half was a difficult half with the game turning a little bit ugly with off the ball stuff coming from Crumlin which disrupted our rhythm,” added Clyde.
“We scored a stunning free-kick from Ryan Doherty, which is something he can and should be doing more often with his ability on the ball.
“The only downside to a good result was losing Aaron Mullan which looks like a tear to his hamstring,” admitted the United boss.
The former Wolverhampton Wanderers player spoke highly of the youth players who were involved in the game and helped deliver the result.
“Young McCloone had another steady performance at full-back and got better as the game went on,” he said.
“John Butcher was handed his debut for the last 30 mins and did extremely well. It's pleasing to see the young lads starting to step up now and take the opportunity handed to them.”
Mark Clyde also spoke about how the Limavady squad has seemed to settle into the playing style that the management wants to implement.
“The biggest difference over the last while, especially in the last month, is that the lads are now producing the play that is letting them control large parts of games.
If we can continue to improve in a couple of other areas we will be getting a lot better results than what we have been getting,” he insisted.
Beating the cup holders may give supporters hope that the Roesiders can now go on to emulate their rivals and win a trophy but Clyde remains grounded and is focussed on the bigger picture.
“Obviously we would love to go on and win some silverware but again as I have said before it's about building a club with the structure that keeps the team winning not only now but for years to come,” he added.
There have been a couple of additions to the Limavady United squad this month with Jack Mullan being signed from Maiden City and centre-forward, Stephen Mills joining the club as well.
A special mention too must be given to Jack Devenney who has been selected to represent Northern Ireland in the under 18's youth squad.
Limavady United's next fixture will be a visit to Fortwilliam Park on Saturday, January 25, where they will take on Tobermore United in the league.