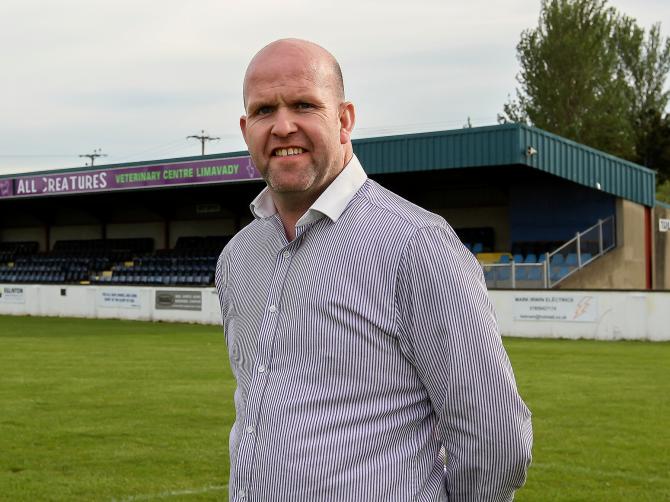 IN what was the second clash between these two sides in the space of three weeks, Limavady United were to be left frustrated with Saturday's result at Fortwilliam Park as Tobermore United were able to collect their first win of the campaign and move off bottom spot in the Intermediate league standings.
In tough conditions both sides were nullifying each other and both defences were proving difficult to break down for much of the first half.
Tobermore's centre half, Paul Keane took the opportunity to put the home side in front nine minutes before the break which proved to be the only goal of the game.
Dean Brown saw red for Limavady United as he picked up a second bookable offence in the closing stages of the contest..
Limavady U20s had a more positive result as they were able to collect a 3-2 win over Bangor which pushes the young Roesiders into four position in the league standings.
Limavady United team manager, Mark Clyde spoke after the game on what was a difficult afternoon in South Derry.
Mark said: “It was a tough day at the office. Since my time in charge it was possibly the worst performance that we've put in as a team. We were off the mark in a lot of areas and we need to improve on these to successfully get through difficult games.”
“It's a learning curve for us as a team. We maybe showed a bit of naivety trying to play nice football when it maybe wasn't possible to have fluid passing. We need to learn how to win ugly. The pitch wasn't the easiest to play on which affected our play.
“Hopefully we can use the loss to our advantage and focus on areas where we displayed weaknesses. We must work on new plans to deal with difficult encounters in future.
“Credit to Tobermore. They were organized well and deserved their victory but we made them look better because of how poor we played.
“Throughout the game we had a couple of really good chances but poor decision making cost us good opportunities, ” Clyde continued.
“Some off the referee decision on the day were questionable for both sides. The red card for Dean was frustrating. I'm not sure why it was given. It didn't make any sense.
“On a positive note we saw debuts for Stephen Mills and Jack Mullan. Young John Butcher also featured and played well and showed good signs of being comfortable playing at senior level.
“The under 20s had another good win at the weekend and are really doing well in their league. We're hoping to bleed more youth players through as the season goes on.”
Limavady United will aim to get back on track when Lisburn Distillery visit The Showgrounds in the league this Saturday afternoon.