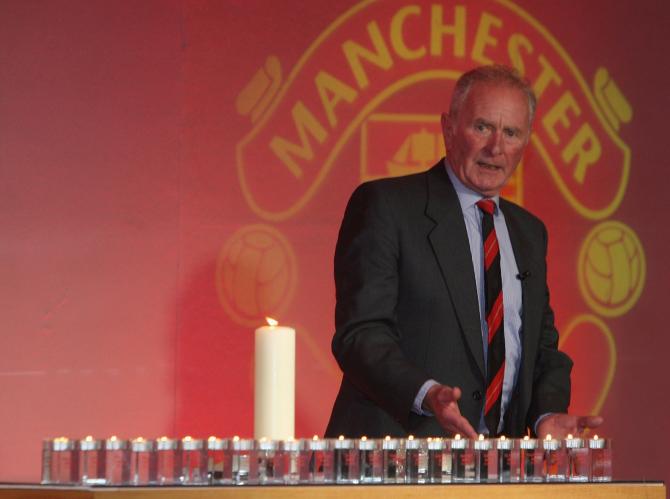 FORMER Manchester United team-mate and fellow Munich air disaster survivor Sir Bobby Charlton has led tributes to Harry Gregg, who has died.
Gregg (87) passed away, surrounded by his family, in Coleraine’s Causeway Hospital on Monday morning, following a short illness.
Sir Bobby, the last remaining survivor of the plane crash which claimed 20 lives on February 6 1958, said he would remember his ex-team-mate as an ‘heroic figure.’
Gregg earned praise for his actions in the immediate aftermath of the crash at Munich-Riem Airport when he helped pull survivors from the wreckage.
“I was proud to call him a team-mate,” said Sir Bobby.
“ For all the matter of fact things Harry said about that night in Munich, for me, he will always be remembered as a heroic figure.
“A shining light both on and off the pitch he deserves to be remembered as one of the greatest names in Manchester United’s history.
“Harry will be deeply missed and our thoughts are with Carolyn and his family at this very sad time,” he added.
Former Man Utd manager Sir Alex Ferguson, who enjoyed a long-standing friendship with Gregg, said he was ‘deeply saddened’ to hear of his friend’s passing.
“Harry was a man of great character and a true legend at our club,” said Sir Alex.
“I remember that he was always very excited and proud to host our youth team at his boarding house for the Milk Cup every summer, so he could recount the tales of his playing days.
“My thoughts and prayers are with Carolyn and his family at this very sad time. God bless Harry.”
News of Harry Gregg’s death was announced by the Harry Gregg Foundation on Monday morning.
“It is with great sorrow that we inform of the death of Manchester United and Northern Ireland legend Harry Gregg, OBE,” it said in a statement posted on Facebook.
“Harry passed away peacefully in hospital surrounded by his loving family.”
Harry Gregg started his career at Windsor Park Swifts while he was still an apprentice joiner, also playing for his local club Coleraine before moving to England at the age of 18 to join Doncaster Rovers.
He moved to Manchester United five years later in a move which at the time saw him become the world’s most expensive goalkeeper.
He won 25 international caps and was named the best goalkeeper at the 1958 World Cup in Sweden, where he helped Northern Ireland reach the quarter-finals, just months after Munich.
After hanging up his gloves, Harry went into management, taking up the top job at Shrewsbury Town where he spent four years. He also had stints at Swansea City, Crewe and Stoke City.
In 2012, Gregg was handed a belated testimonial by United, in which a full-strength Manchester United side, led by Sir Alex Ferguson, took on an Irish League select side.
United paid tribute to the Munich air disaster survivors only two weeks ago on the 62nd anniversary of the incident.