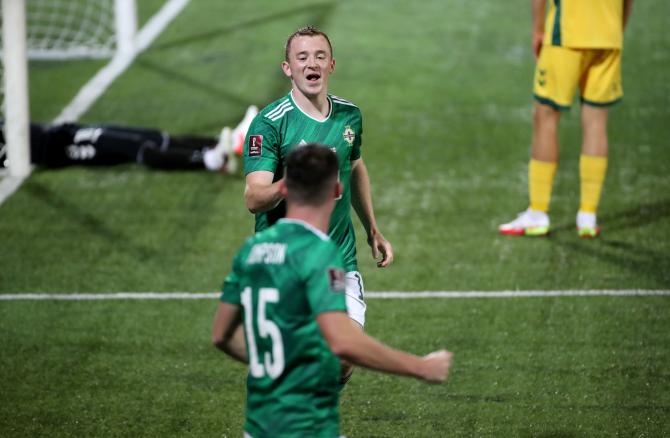 Northern Ireland reignited their World Cup qualifying hopes with a comprehensive victory against Lithuania this evening.

Ian Baraclough was without several of his top stars for the trip to Vilnius but his side managed to get the job done with a magnificent 4-1 win.

The visitors started brightly and their constant pressure was rewarded on 20 minutes as Conor Washington’s cross met Daniel Ballard inside the box and the big defender made no mistake from close range.

Northern Ireland should have doubled their advantage before the break as Shayne Lavery fired wide from Jamal Lewis’ cross, with the striker also blazing over after being picked out by a clever ball from Jordan Thompson.

However, the second goal duly arrived on 50 minutes from the penalty spot after Michael Smith had a strike deflected off the arm of a Lithuania defender. The ball was picked up by Washington who sent the ‘keeper the wrong way from 12 yards.

With Northern Ireland you know they never do things the easy way as the hosts halved the deficit in spectacular fashion. A set piece delivery wasn’t properly cleared with Rolandas Baravykas firing home an unstoppable effort from distance.

Then, there would be a further scare for Northern Ireland as Lithuania were awarded a spot kick after Paddy McNair was adjudged to have fouled Justas Lasickas inside the box. Thankfully for Northern Ireland, stopper Bailey Peacock Farrell would be the hero as prevented former Hearts man Arvydas Novikovas from blasting home.

That stop would prove vital moments later as Northern Ireland added a killer third as Lavery netted the first goal for his country after being found by Thompson, before there was time to even add a fourth goal of the evening as McNair scored from the third penalty awarded of the evening.

A job well done for Baraclough’s men who now travel to face Estonia on Sunday and then host Switzerland next Wednesday.