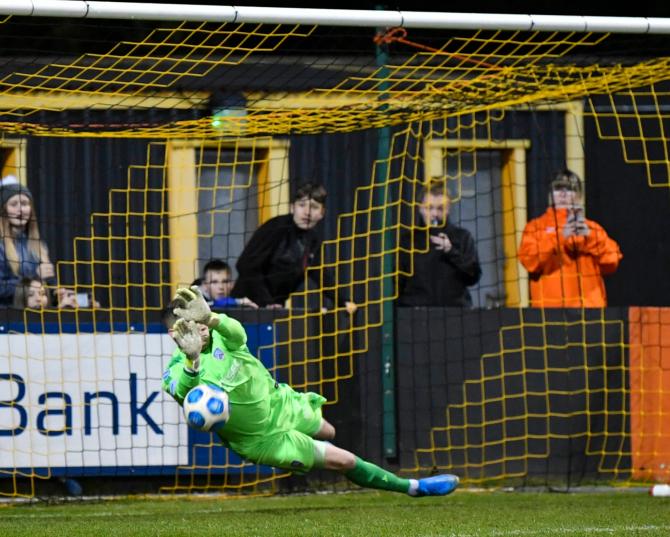 COLERAINE goalkeeper Gareth Deane is expecting another "tough game" as the Bannsiders travel to The Oval this evening in the Danske Bank Premiership (KO 5:30pm).

Oran Kearney's side will hope to maintain their good of form as they face Glentoran, in a match that will be streamed live on the BBC Sport NI website and available via the red button.

The Bannsiders - like Glentoran - were in League Cup action on Wednesday night as a brace from Matthew Shevlin helped the holders through to the last eight, with the East Belfast side overcoming Glenavon via penalties.

Kearney's men have kept the back door firmly shut in recent weeks as they have registered six clean sheets from their last seven games in all competitions.

“Job done for us tonight," Deane said after the win against Carrick.

“It is always tough coming to Carrick, they’re a great side and they’ve started the season well.

“I think the 3-0 game here back in September flattered us a bit and we knew it was going to be a battle and Oran had us well prepared.

“I keep doing my job and the clean sheets are important.

“I think that’s six clean sheets in our last seven games, so long may it continue."

The former Linfield stopper had an action-packed night in East Antrim as he was booked for handling the ball outside the area, before saving a penalty that he was adjudged to have given away when he clearly won the ball in a tackle with Emmett McGuckin.

“I don’t know how the decision was made to award a penalty," he added.

“I didn’t speak to the referee after the match as I went straight into the changing room.

“I’m happy enough with the save but it’s a pity it had to come to that.

“I have to thank Michael Doherty as he studies penalties and he gave me a shout where he was going to go, so thankfully I went the right way."

Coleraine and Glentoran drew three times within a matter of weeks last season and Deane remarked that they are always close encounters between the two clubs.

“It’s a massive game," he continued.

“They have invested heavily in their squad and we played them in pre-season and done well.

“Hopefully it’ll be a good game of football and another clean sheet.

“It’s always tight going there, there will be a big crowd at The Oval and we know what’s coming, so we have to rest up and go again on Saturday."